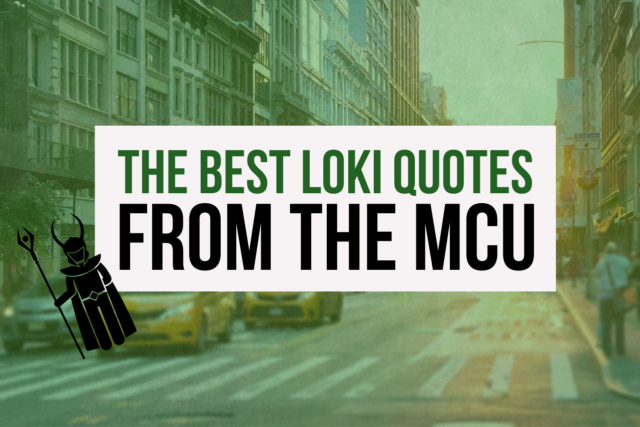 On one hand, he’s a trickster god who causes plenty of problems (like trying to conquer Earth and getting Thor banished from Asgard, hello?) but on the other, well, Tom Hiddleston certainly makes being bad look good!

While sometimes all it takes is a look for Loki Laufeyson to get his point across, he is also known for some pretty iconic lines as well. Here are our favorite quotes from Loki throughout the Marvel Cinematic Universe, be they funny or fearsome.

We’ve got to start with the most well-known and epic of Loki’s quotes obviously even if they are the ones you probably already have memorised (same tbh)!

“Kneel before me. I said KNEEL!” The Avengers

“I am Loki of Asgard and I am burdened with glorious purpose.” The Avengers

“You must be truly desperate to come to me for help.” Thor: The Dark World

“It is my birth right!” Thor: The Dark World

Loki is a master of the angry screaming speech. These are the best quotes he’s said when truly outraged or looking to hurt others with his words.

“Enough! You are, all of you are beneath me! I am a god, you dull creature, and I will not be bullied by…” [gets pummelled by the Hulk] The Avengers

“I won’t touch Barton. Not until I make him kill you! Slowly, intimately, in every way he knows you fear! And then he’ll wake just long enough to see his good work, and when he screams, I’ll split his skull! This is MY bargain, you mewling quim!” The Avengers

“You took me for a purpose, what was it? TELL ME!” Thor

“Is not this simpler? Is this not your natural state? It’s the unspoken truth of humanity that you crave subjugation. The bright lure of freedom diminishes your life’s joy in a mad scramble for power. For identity. You were made to be ruled. In the end, you will always kneel.” The Avengers

“And what of Thor? You’ll make that witless oaf king while I rot in chains?” Thor: The Dark World

“Thor: Loki, this is madness! Loki: Is it madness? Is it? IS IT? I don’t know what happened on Earth to make you so soft! Don’t tell me it was that woman?… Oh, it was. Well maybe, when we’re done here, I’ll pay her a visit myself!” Thor

Occasionally Loki says something that actually makes us feel bad for him. These are his best sad quotes, where we finally get to see the real feelings he hides behind his trickster mask.

“Thor: I will tell Father you died with honour. Loki: I didn’t do it for him.” Thor: The Dark World

“I guess I’ll have to go it alone. Like I’ve always done.” Thor: Ragnarok

“I assure you, brother, the sun will shine on us again.” Avengers: Infinity War

“So I am no more than another stolen relic, locked up here until you might have use of me?” Thor

“It hurts, doesn’t it? Being lied to. Being told you’re one thing and then learning it’s all a fiction.” Thor: Ragnarok

“Thor: You think you alone were loved of mother? You had her tricks, but I had her trust! Loki: Trust. Was that her last expression? Trust? When you let her die!” Thor: The Dark World

[Said while dying] “You will…. never…. be a god.” Avengers: Infinity War

As well as being pretty sinister sometimes, Loki is also a master of the witty comeback or saying things that maybe aren’t meant to be funny (from his point of view) but definitely had us cracking up. Here are the most humorous Loki lines.

“I have been falling… for 30 minutes!” Thor: Ragnarok

“I thought you said you knew how to fly this thing?” Thor: The Dark World

“You know this is wonderful! This a tremendous idea! Let’s steal the biggest, most obvious ship in the universe and escape in that! Flying around the city, smash it into everything in sight and everyone will see it! It’s brilliant, Thor!” Thor: The Dark World

“You lied to me! I’m impressed.” Thor: The Dark World

“If it’s all the same to you, I’ll have that drink now.” The Avengers

“Thor: You betray me, I’ll kill you. Sif: Betray him, and I’ll kill you. Volstagg: If you even think about betraying him… Loki: You’ll kill me? Evidently, there will be a line.” Thor: The Dark World

“I have to get off this planet.” Thor: Ragnarok

[Jane slaps Loki] “Jane: That was for New York! Loki: I like her.” Thor: The Dark World

[Loki as Captain America] “Oh, this is much better. Costume’s a bit much… so tight. But the confidence, I can feel the righteousness surging. Hey, you wanna have a rousing discussion about truth, honor, patriotism? God bless America…” Thor: The Dark World

“Thor: Are you mad? Loki: Possibly.” Thor: The Dark World

“Your savior is here!” Thor: Ragnarok

“Oh dear. Is she dead?” Thor: The Dark World

Did We Forget Any of Your Favourite Loki Lines and Sayings?

The 30+ Best Bucky Barnes Quotes & Lines from the MCU

The 100+ Best Chilling Adventures of Sabrina Quotes: Iconic Lines Every Fan Will Love!

The Falcon and the Winter Soldier’s Madripoor Locations Revealed!