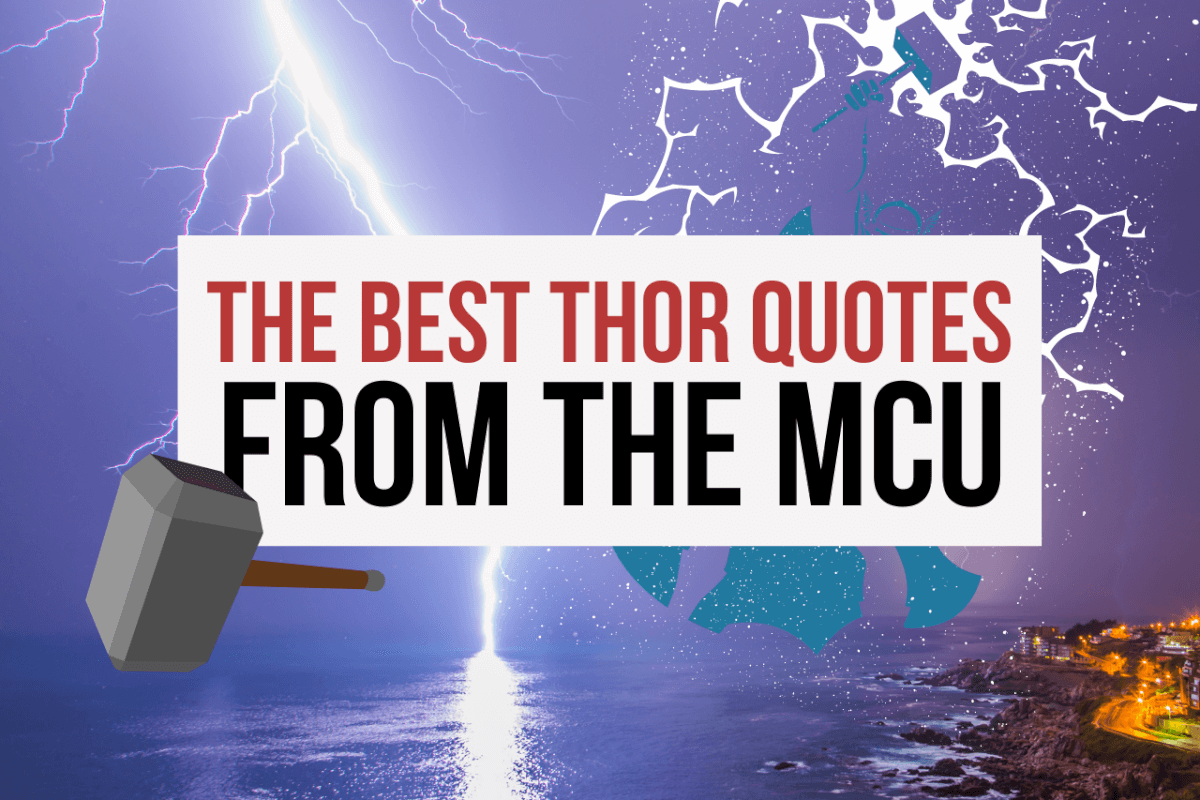 Without a doubt, Thor Odinson is a pretty memorable character.

From his glorious golden locks (at least in the first few films) to his iconic hammer and big muscles, it’s easy to forget that he often has memorable lines as well.

Oh, sorry, got distracted there for a second!

But as we were saying, Thor is often highly quotable, so in this post we’re rounding up all the best and often funniest lines Thor has said throughout the Marvel movies. Enjoy!

The Most Memorable and Epic Thor Lines

Looking for some truly iconic Thor quotes? These are THE Thor Lines from the MCU that are by far the most memorable and quotable. Bonus points if you manage to use them in real life!

“You people are so petty, and tiny.” The Avengers

“I choose to run towards my problems, and not away from them. Because’s that– because’s that what heroes do.” Thor: Ragnarok

[the Hulk bursts through the stadium door] “Thor: YES! [everyone in the stadium looks confused] Thor: Hey, hey! We know each other! He’s a friend from work!” Thor: Ragnarok

“I have no plans to die today.” Thor

“I’d rather be a good man than a great king.” Thor: The Dark World

[about Captain Marvel] “I like this one.” Avengers: Endgame

“All words are made up.” Avengers: Infinity War

[Steve Rogers calls Mjolnir to himself] “I knew it!!” Avengers: Endgame

“Dr. Strange: Thor, I sense a great change in your future. Destiny has dire plans for you, my friend. Thor: I have dire plans for destiny.” Thor: Ragnarok

There’s no denying that Thor often says very funny things, whether on purpose or just because he doesn’t always understand life on Earth. Here are the many lines from Thor that have made us laugh out loud throughout the movies.

“I don’t hang with the Avengers anymore. It all got too corporate.” Thor: Ragnarok

[Thor arrives in Vanaheim to help Sif] “Sif: I’ve got this completely under control! Thor: Is that why everything’s on fire?” Thor: The Dark World

“Thor: [walking into a pet shop]  I need a horse! Pet Store Clerk: We don’t have horses. Just dogs, cats, birds. Thor: Then give me one of those large enough to ride.” Thor

“Natasha Romanoff: Thor, report on the Hulk. Thor: The gates of Hel are filled with the screams of his victims! [Natasha glares at him while Bruce groans and puts his head in his hands] Thor: But not the screams of the dead, of course. No, no… wounded screams… mainly whimpering, a great deal of complaining and tales of sprained deltoids and… gout.” Avengers: Age of Ultron

“The girl tried to warp my brain! Take special care, I doubt if humans can keep her at bay! Fortunately, I am mighty… [enters a vision]” Avengers: Age of Ultron

“My God, you’re a Valkyrie… You know, I used to want to be a Valkyrie when I was younger, until I found out you were all women. There’s nothing wrong with women, of course, I like women. Sometimes a little too much. Not in a creepy way, just more like a respectful appreciation. I think it’s great, an elite force of women warriors. It’s about time.” Thor: Ragnarok

“By Odin’s beard, you shall not cut my hair, lest you feel the wrath of the mighty Thor! [pause] Please! Please kind sir, do not cut my hair! No! Nooo!” Thor: Ragnarok

“A creepy old man cut my hair off!” Thor: Ragnarok

“Rocket Raccoon: Nidavellir is real? Seriously? I mean, that place is a legend. They make the most powerful and horrific weapons to ever torment the universe. I would very much like to go there, please. Thor: The rabbit is correct and clearly the smartest among you. Rocket Raccoon: Rabbit?” Avengers: Infinity War

[talking about Mjolnir] “Thor: Quite unique. It was made from this special metal from the heart of a dying star. And when I spun it really, really fast it gave me the ability to fly. Korg: You rode a hammer? Thor: No, I didn’t ride the hammer. Korg: The hammer ride you on your back? Thor: No, I would spin it really fast and it would pull me off the… Korg: Oh my god, the hammer pulled you off? Thor: The ground! It would pull me off the ground, into the air and I would fly.” Thor: Ragnarok

“Steve Rogers: New haircut? Thor: Looks like you’ve copied my beard. By the way, this is a friend of mine, the tree.” Avengers: Infinity War

“Bruce Banner: You’re just using me to get to the Hulk. That’s low. You’re not my friend. Thor: No, no, no. I don’t even like Hulk. He’s always like, grr… smash, smash, smash. I prefer you.” Thor: Ragnarok

“Rocket Raccoon: You speak Groot? Thor: Yes, they taught it on Asgard. It was an elective.” Avengers: Infinity War

“Korg: [playing Fortnite] Thor, he’s back. That kid on the TV just called me a dickhead again. Thor: Noobmaster. Korg: Yeah, Noobmaster69. Thor: [takes the headset] Noobmaster, hey, it’s Thor again. You know, the God of Thunder? Listen, buddy, if you don’t log off this game immediately, I am gonna fly over to your house, come down to that basement you’re hiding in, rip off your arms and shove them up your butt! Oh, that’s right, yes, go cry to your father, you little weasel! Korg: Thank you, Thor. Thor: Let me know if he bothers you again, okay? Korg: Thank you very much, I will.” Avengers: Endgame

“Loki: Do you really think it’s a good idea to go back to earth? Thor: Yes, of course. People on earth love me, I’m very popular.” Thor: Ragnarok

[Captain America is using Stormbreaker] “Thor: No, give me that. [Thor gives him Mjolnir] Thor: You have the little one.” Avengers: Endgame

“I know what you’re thinking. “Oh, no. Thor’s in a cage. How did this happen?” Well, sometimes you have to get captured just to get a straight answer out of something. It’s a long story. Basically, I’m a bit of a hero. See, I’ve spent some time on Earth… for the record, I saved the planet a couple of times. Then I went searching through the cosmos for a couple of magic colorful Infinity Stone things… but didn’t find any. That’s when I came across a path of death, and destruction. Which led me all the way here to this cage… where I met you. [looks at a skeleton]” Thor: Ragnarok

In his time fighting alongside the Avengers and trying to prevent Ragnarok, Thor has often shown his anger with some iconic lines. Here are Thor’s most memorable angry quotes.

“IS THAT THE BEST YOU CAN DO?” Avengers: Age of Ultron

“Be warned, this boy grows tired of your mockery!” Thor

“Do I look to be in a gaming mood?” The Avengers

“We’re not friends, and I don’t give a shit about your games!” Thor: Ragnarok

“Bruce Banner: Like Thanos. [Thor pauses, then grabs Banner by the coat, pointing at him] Thor: Don’t say that name.” Avengers: Endgame

It’s not often we see Thor sad but it does happen. These are the saddest quotes by Thor where he has been at his most vulnerable in the few times he lost a fight or people he loves.

“What more could I lose?” Avengers: Infinity War

“Thor: What have I done? Heimdall: You saved us from extinction. Asgard is not a place, it’s a people.” Thor: Ragnarok

“I went for the head.” Avengers: Endgame

“I’ve been having terrible dreams as of late. Every night I see Asgard falling to ruins.” Thor: Ragnarok

“The only thing that is permanent in life is impermanence.” Avengers: Endgame

The dynamic between Thor and Loki is complicated but often hilarious! Here are our favorite lines Thor has said about Loki, as well as some funny bits of dialogue between the two brothers. Make sure you also read our best quotes by Loki article!

“Thor: Have a care how you speak! Loki is beyond reason, but he is of Asgard and he is my brother! Natasha Romanoff: He killed eighty people in two days. Thor: He’s adopted.” The Avengers

“Loki, I thought the world of you. I thought we were gonna fight side by side forever.” Thor: Ragnarok

“Loki: Here’s the thing. I’m probably better off staying here on Sakaar. Thor: That’s exactly what I was thinking. Loki: …Did you just agree with me? Thor: This place is perfect for you. It’s savage, chaotic, lawless. Brother, you’re going to do GREAT here.” Thor: Ragnarok

“Brother, however I have wronged you, whatever I have done that has led you to do this, I am truly sorry. But these people are innocent, taking their lives will gain you nothing. So take mine, and end this.” Thor

“What would you like me to say? You faked your own death, you stole the throne, stripped Odin of his power, stranded him on Earth… to die, releasing the Goddess of Death. Have I said enough, or do you do you want me to go further back than the past two days?” Thor: Ragnarok

“Loki: [aboard a Dark Elf ship]  I thought you said you knew how to fly this thing. Thor: [looking at the controls, clearly lost] I said ‘how hard could it be’.” Thor: The Dark World

“Valkyrie: He did try to kill me. Thor: Yes, me too. On many, many occasions. There was one time when we were children, he transformed himself into a snake, and he knows that I love snakes. So, I went to pick up the snake to admire it and he transformed back into himself and he was like, “Blergh, it’s me!” And he stabbed me. We were eight at the time.” Thor: Ragnarok

[Thor and Loki commandeer a Harrow] “Loki: Look, why don’t you let me take over? I’m clearly the better pilot! Thor: Is that right? Out of the two of us, which one can ACTUALLY fly? [the Harrow takes out a building] Thor: Not a word…” Thor: The Dark World

“That looks painful. Dear brother, you’re becoming predictable. I trust you, you betray me, round and round in circles we go. See Loki, life is about… It’s about growth, it’s about change, but you seem to just want to stay the same. I guess what I’m trying to say is that you’ll always be the god of mischief, but you could be more.” Thor: Ragnarok

Did We Forget Any of Your Favourite Thor Lines and Sayings?