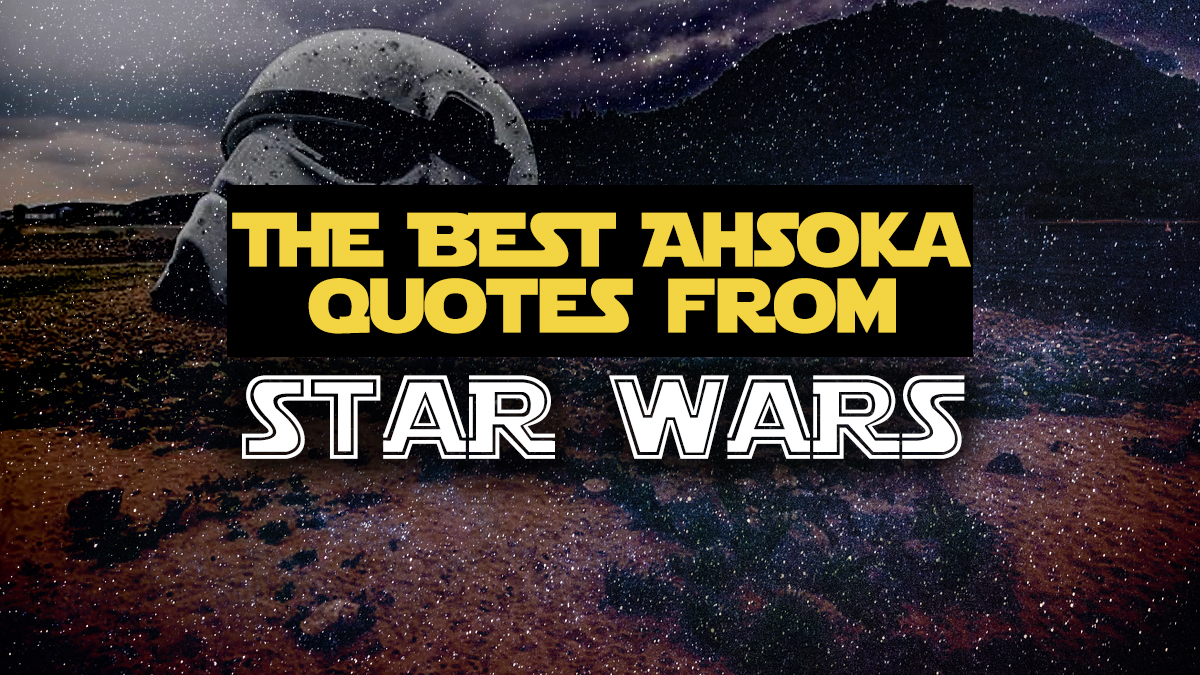 There’s no denying that Ahsoka Tano is a TOTAL badass and role model for anyone in the galaxy.

With her sharp quips, biting sarcasm, and point-blank dialogue that can make anyone laugh or feel empowered (depending on the scene), Ahsoka is often a Star Wars fandom favorite.

Especially now, with Season 2 (Chapter 13) of The Mandalorian showing Ahsoka in her real-life debut (squee! Snips in human form!), we geeks are ALL abuzz.

In honour of the occasion, here’s a roundup of some of the most iconic Ahsoka lines from her time in The Clone Wars and Rebels… and yes, even her best quotes from her reveal in Chapter 13 of Mando.

Ahsoka has so much great dialogue, we separated her lines into several categories: the best and most powerful, most sassy, lines that tell it like it is, quotes that showcase her independence, and even some heartwarming verbiage. Enjoy!

Let’s face it – Ahsoka has some of the most kickass lines in the Star Wars galaxy. Brought to life by Ashley Eckstein, these lines are the best and most powerful, and have most likely left you with, “OMG, WE STAN!” expressions (either in your head or out loud).

“(To Anakin) When I was out there, alone, all I had was your training and the lessons you taught me. And because of you, I did survive. And not only that– I was able to lead others to survive as well.”
The Clone Wars (Season 3, Episode 22)

“You don’t have to carry a sword to be powerful. Some leaders’ strength is inspiring others.”
The Clone Wars (Season 4, Episode 2)

Ahsoka: You’re lucky Anakin didn’t show up. The way you’re fighting, you wouldn’t have lasted long.
Maul: Oh, you have Kenobi’s arrogance!
Ahsoka: You’ll find I have many qualities for you to dislike!
The Clone Wars (Season 7, Episode 10)

Vader: Anakin Skywalker was weak. I destroyed him.
Ahsoka: Then I will avenge his death!
Rebels (Season 2, Episode 22)

Vader: Revenge is not the Jedi way.
Ahsoka: I am no Jedi!
Rebels (Season 2, Episode 22)

Ahsoka Tano Quotes from The Mandalorian

At long LAST, Ahsoka finally made her appearance in The Mandalorian!

We assume that you’re a diehard geek who has already rewatched Chapter 13 a billion times, can recite the lines, and have now mastered Ahsoka’s saber choreography in her battles… but if not, and you want to be SPOILER-FREE, scroll down to the latter part of this article for the other Ahsoka quotes.

But really, we do assume that you’re all caught up on Mando already (or else, shame on you). All of these quotes are from Chapter 13 (as of now), where Ahsoka makes her first IRL appearance (and OMG, it’s everything we could have imagined it to be!).

Whether Ahsoka is talking to Grogu or fiercely growling at the Magistrate, we’ve rounded up her finest quotes from this episode.

“May the Force be with you.”

The Magistrate: You’ll learn nothing from me.
Ahsoka: I won’t give you that choice.

“They already suffer under your rule. Surrender… or face the consequences.”

Ahsoka: Grogu and I can feel each other’s thoughts.
Mandalorian: Grogu?
Ahsoka: Yes. That’s his name.

(Did you scream with delight as much as we did when the reveal about Baby Yoda’s real name came through?!)

“Let’s see what knowledge is lurking inside that little mind.”

“I sense much fear in you.”

Ahsoka: He’s formed a strong attachment to you. I cannot train him.
Mandalorian: What? Why not? You’ve seen what he can do.
Ahsoka: His attachment to you makes him vulnerable to his fears. His anger.
Mandalorian: All the more reason to train him!
Ahsoka: No. I’ve seen what such feelings can do to a fully-trained Jedi Knight. To the best of us. I will not start this child down that path. It’s better to let his abilities fade.

“He was raised at the Jedi Temple in Coruscant. Many masters trained him over the years. At the end of the Clone Wars when the Empire rose to power, he was hidden. Someone took him from the temple. Then his memory becomes… dark. He seemed lost. Alone. I’ve only known one other being like this. A wise Jedi Master named Yoda.”

“The Force is what gives him his powers. It is an energy field, created by all living things. To wield it takes a great deal of training and discipline.”

“Where is Grand Admiral Thrawn?”

Ahsoka: Go to the Planet Tython. There, you’ll find the ancient ruins of a temple that has a strong connection to the Force. Place Grogu on a seeing stone on the top of a mountain.
Mandalorian: Then what?
Ahsoka: Then, Grogu may choose his path. If he reaches out through the Force, there’s a chance a Jedi will sense his presence and come searching for him. Then again… there aren’t many Jedi left.

Ahsoka is quite the sass-talker throughout her scenes in The Clone Wars and Rebels. Here are some of her finest witty remarks and comebacks, some which burn more than others!

“So it’s only okay when you are the one who doesn’t do what the Council says.”
The Clone Wars (Season 1, Episode 2)

“Master, just admit it already; you don’t like my flying.”
The Clone Wars (Season 1, Episode 3)

Ahsoka: If it isn’t the hairless harpy.
Asajj: If it isn’t Skywalker’s filthy, obnoxious, little pet.
Ahsoka: How nice of you. Tell you what, I’ll give you a merciful death.
The Clone Wars (Season 1, Episode 9)

“So which part of the situation did you have under control: the blocked entrance, the poison gas, or that Gundark behind you?”
The Clone Wars (Season 1, Episode 11)

Anakin: Have you seen Padmé?
Ahsoka: She’s right next to me! I’m okay, too. Thanks for asking.
The Clone Wars (Season 1, Episode 17)

Anakin: Yeah, you’re right, I probably deserve most of the credit. But not all of it.
Ahsoka: Good thing I know you don’t mean everything you say.
The Clone Wars (Season 1, Episode 18)

“Enjoy this while you can, sleemo, this burning boat is about to finish us both off.”
The Clone Wars (Season 2, Episode 2)

“Well, this is another fine mess you’ve gotten us into.”
The Clone Wars (Season 2, Episode 5)

“Don’t worry. We’ll run out of air long before we starve.”
The Clone Wars (Season 2, Episode 6)

Anakin: Besides, the role of master comes easily to me.
Ahsoka: Really? Well, this time, try to be convincing at it.
The Clone Wars (Season 4, Episode 12)

“Hungry? Careful not to choke on your stupidity.”
The Clone Wars (Season 4, Episode 14)

“Care to tell me what this is all about? Or would you rather save it for the Council?”
The Clone Wars (Season 7, Episode 10)

The Greatest Ahsoka Tano Lines That Say it Like it is

Ahsoka has no qualms about speaking her mind – regardless of the situation she’s in. These are some of her lines where she flat-out says things like they are (no filter necessary).

“Wait! Just because there hasn’t been any survivors before, doesn’t mean there won’t be any this time.”
The Clone Wars (Season 1, Episode 2)

“I’ve certainly perfected the art of demolishing ships and almost getting my master killed.”
The Clone Wars (Season 1, Episode 13)

“If there’s one thing I’ve learned from you, master, it’s that following direct orders isn’t always the best way to solve a problem.”
The Clone Wars (Season 3, Episode 18)

“I did realize something. The politics of war are not as black and white as I once thought they were.”
The Clone Wars (Season 3, Episode 10)

“This is why the people have lost faith in the Jedi. I had, too, until I was reminded of what the Order means to people who truly need us.”
The Clone Wars (Season 7, Episode 9)

“The Republic couldn’t have asked for better soldiers, nor I a better friend.”
The Clone Wars (Season 7, Episode 11)

“I was beginning to believe I knew who you were behind that mask, but it’s impossible. My master could never be as vile as you!”
Rebels (Season 2, Episode 22)

“In my experience, when you think you understand the Force, you realize just how little you know.”
Rebels (Season 4, Episode 13)

“You always blame the ship.”
The Clone Wars

“Have a little faith.”
The Clone Wars

Ahsoka Quotes That Showcase Her Independence

Much like every other female warrior in the galaxy, Ahsoka is a fiercely independent gal who never takes “no” for an answer. These quotes display her resilience, stubbornness, and strong will to always fight for what’s right for her people (and overall democracy).

Anakin: It was foolish of you to take on General Grievous by yourself.
Ahsoka: Well, I was leading the mission, and it seemed like a good idea at the time.
The Clone Wars (Season 1, Episode 7)

Anakin: That’s not my role, Padmé.
Ahsoka: Why not? Why isn’t your role? Aren’t we Jedi Knights? Isn’t it our duty to speak our minds to advise the Chancellor?
The Clone Wars (Season 3, Episode 10)

“How am I supposed to learn if you won’t let me share the risk?”
The Clone Wars (Season 3, Episode 18)

The Most Heartwarming Ahsoka Tano Quotes

Ahsoka has feelings, too. While Jedi aren’t meant to show or delve into these emotions much, here are some heartwarming (and maybe even sad) lines that prove she’s just like the rest of us.

“It’s just– I get confused sometimes. It’s forbidden for a Jedi to form attachments, yet we’re suppose to be compassionate.”
The Clone Wars (Season 1, Episode 13)

“I have to sort this out on my own, without the Council… and without you.”
The Clone Wars (Season 5, Episode 20)

We Hope You Enjoyed This Roundup of the Best Ahsoka Tano Quotes!

Did we miss any of Ahsoka’s most empowering lines? Let us know in the comments! Additionally, we hope this list has inspired you to pick up her lightsabers, practice for battle, and be even stronger with the Force!