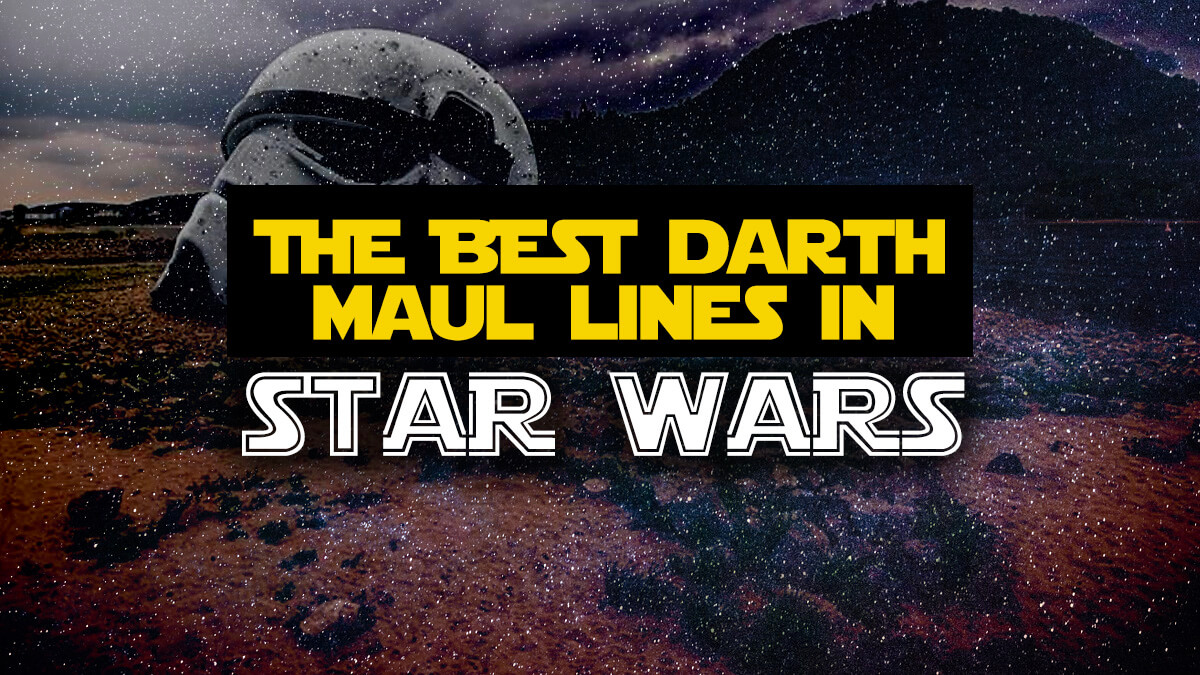 It’s obvious that Darth Maul is even more terrifying than Darth Vader in appearance, and he’s often seen fighting more than speaking…

But while his lines throughout the various Star Wars films and TV series are limited, we’ve managed to assemble a few of his trademark sayings below.

So, if you’re searching for the perfect Darth Maul quote, we hope you find what you’re looking for below.

*Please note that some of these quotes may contain spoilers, so we suggest you refrain from scrolling below if you haven’t seen all the films!

While he’s a man of little words, here are a few of Darth Maul’s best lines:

“Qi’ra, you and I will be working much more closely from now on.” Solo: A Star Wars Story

Since The Clone Wars covers the character arc and progression of Anakin Skywalker’s character, Darth Maul appears frequently as one of the show’s main villains. We’ve collected a few of his best quotes below:

“I was apprenticed to the most powerful being in the galaxy once. I was destined to become… so much more. But I was robbed of that destiny by the Jedi, by Obi-Wan Kenobi.” Season 4, Episode 22 “Revenge”

“In a galaxy at war, Savage, there is only one way to get the attention of the Jedi: Slaughter of the innocent, mercilessly and without compromise.” Season 4, Episode 22 “Revenge”

“You may have forgotten me, but I will never forget you! You cannot imagine the depths I would go to to stay alive, fuelled by my singular hatred for you.” Season 4, Episode 22 “Revenge”

“Pre-Vizsla: Do you serve Count Dooku?
Darth Maul: I serve no one.” Season 5, Episode 14 “Eminence”

“Let him drown in his misery. Take him to his cell to rot.” Season 5, Episode 16 “The Lawless”

“Justice is merely the construct of the current power base. A base which, according to my calculations, is about to change.” Season 7, Episode 10 “The Phantom Apprentice”

“There’s no justice! No law! No Order! Except for the one that will replace it!” Season 7, Episode 10 “The Phantom Apprentice

“Every choice you have made… has led you to this moment.” Season 7, Episode 10 “The Phantom Apprentice

Here are a few of his notable lines:

“The Sith… The Sith took everything from me. Ripped me from my mother’s arms, murdered my brother, used me as a weapon, and then cast me aside. Abandoned me! Once I had power, now I have nothing. Nothing.” Season 2, Episodes 21 & 22, “Twilight of the Apprentice”

“Your passions give you strength and through strength you gain power. You have seen it, you feel it.” Season 2, Episodes 21 & 22, “Twilight of the Apprentice”

“Unless you take risks and do what must be done, there will always be limits to your abilities.” Season 2, Episodes 21 & 22, “Twilight of the Apprentice”

“I am the enemy of your enemy now, and I have my own reasons for wanting the Empire to fall…” Season 2, Episodes 21 & 22, “Twilight of the Apprentice”

“Of course. It ends where it began. A desert planet with twin suns.” Season 3, Episode 11, “Visions & Voices”

“I have come to kill you, but perhaps it’s worse to leave you here, festering in your squalor.” Season 3, Episode 20 “Twin Suns”

Did We Miss Any of Your Favourite Darth Maul Quotes?