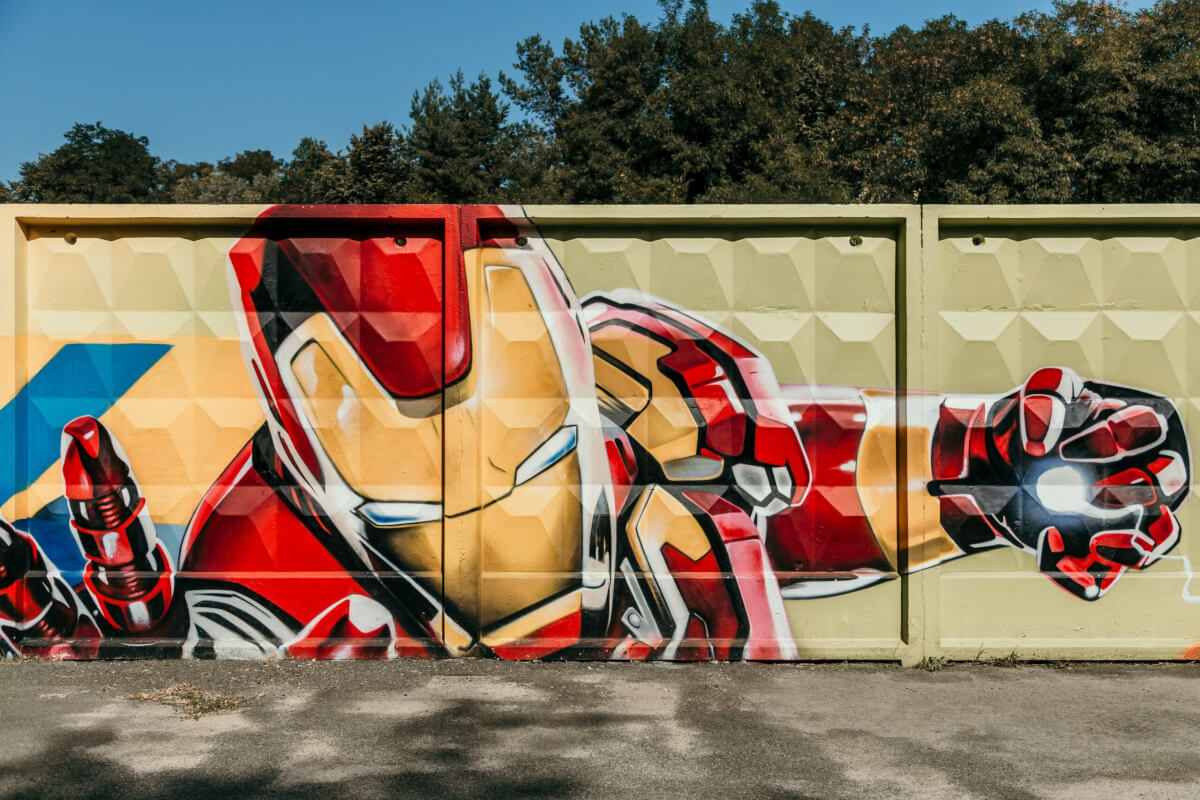 Whether you think he’s a genius (billionaire, playboy, philanthropist) or just an arrogant ass, there’s no denying Tony Stark is good with words.

Whether he’s fighting aliens in his Iron Man suit or just being interviewed as the CEO of Stark Enterprises, his wit and intelligence shines through in all his lines – many of which are especially memorable!

In this article we’re rounding-up all the best lines from Tony Stark/Iron Man including our favorite funny quotes, inspiring, sad and even profound things that he has said. Enjoy!

The Most Famous Iron Man Quotes

Obviously, we have to start with THE most famous and iconic lines ever uttered by Tony Stark, as well as his other most memorable quotes. These are the Iron Man quotes everybody remembers, and often like to use in their own lives!

“What’s the point of owning a race car if you can’t drive it?” Iron Man 2

“Steve Rogers/Captain America: Big man in a suit of armour, take that away, what are you?
Tony Stark/Iron Man: Genius, billionaire, playboy, philanthropist.” The Avengers

“We have a Hulk.” The Avengers

“Thanos: I am… inevitable.
Tony Stark: And I… am… Iron Man!” Avengers: Endgame

The Best Funny Quotes from Iron Man and Tony Stark

Strap in because this section is the biggest! Tony Stark/Iron Man is famous for his witty one-liners and irreverent quips, often referencing pop culture as he pokes fun at others. These are the funniest quotes from Iron Man in the Marvel movies where we laughed out loud.

“[said to a robot] If you douse me again, and I’m not on fire, I’m donating you to a city college.” Iron Man

“Christine Everheart: You’ve been called the Da Vinci of our time. What do you say to that?
Tony Stark: Absolutely ridiculous. I don’t paint.” Iron Man

“Pepper, I’ve been called many things. Nostalgic is not one of them.” Iron Man

“Rhodey: Hey Tony.
Tony Stark: I’m sorry. This is the fun-vee. The hum-drum-vee is back there.” Iron Man

“Tony Stark: [playing Craps]  We’re gonna let it ride! Give me a hand, will you? Give me a little something-something. [woman blows on his dice] Okay, you too.
Rhodey: I don’t blow on a man’s dice.
Tony Stark: Come on, honey bear.” Iron Man

“[to Nick Fury regarding “The Avengers” initiative] I told you I don’t want to join your super-secret boy band.” Iron Man 2

“Justin Hammer: [about Christine Everhart]  She’s actually doing a big spread on me for Vanity Fair. I thought I’d throw her a bone, you know. Right?
Pepper Potts: Right. Well, she did quite a spread on Tony last year.
Tony Stark: And she wrote a story as well.” Iron Man 2

“Drop your socks and grab your crocs, we’re about to get wet on this ride.” Iron Man 2

“Tony Stark: What’s on the docket?
Natalie Rushman/Natasha Romanoff: You have a 9:30 dinner. Tony Stark: Perfect. I’ll be there at 11.” Iron Man 2

“Let the record reflect that I observe Mr. Hammer entering the chamber and I am wondering if and when any actual expert will also be in attendance.” Iron Man 2

“[about Thor] Uh, Shakespeare in The Park? Doth mother know you weareth her drapes?” The Avengers

“That man is playing Galaga! Thought we wouldn’t notice. But we did.” The Avengers

“Bruce Banner: Captain America is on threat watch?
Natasha Romanoff: We ALL are!
Tony Stark: [to Rogers]  You’re on that list? Are you above or below angry bees?
Steve Rogers: I swear, Stark, one more wisecrack out of you…
Tony Stark: Verbal threat! Threatening! I’m being threatened!” The Avengers

“Steve Rogers: Is everything a joke to you?
Tony Stark: Funny things are.” The Avengers

“[to Thor] No hard feelings, Point Break. You’ve got a mean swing.” The Avengers

“Steve Rogers: Are you nuts?
Tony Stark: Jury’s out.” The Avengers

“[on the aircraft carrier] Raise the mizzenmast! Jib the topsails!” The Avengers

“[after almost dying and regaining consciousness] What just happened? Please tell me nobody kissed me.” The Avengers

“Tony Stark: You walked right into this one: I’ve dated hotter chicks than you.
Brandt: [scoffs] Is that all you’ve got? A cheap trick and a cheesy one-liner?
Tony Stark: Sweetheart, that could be the name of my autobiography.” Iron Man 3

“[Tony seals Pepper in the Mark 42 armor, then she saves him from falling debris]
Pepper Potts: I got you!
Tony Stark: I got you first!” Iron Man 3

“Actually he’s the boss. [points to Captain America] I just pay for everything and design everything, make everyone look cooler.” Avengers: Age of Ultron

“Thor: No one has to break anything.
Ultron and Tony Stark: Clearly you’ve never made an omelet.
Tony Stark: He beat me by one second.” Avengers: Age of Ultron

“Wait a second. No one else is going to deal with the fact that Cap just said ‘language’?” Avengers: Age of Ultron

“And for gosh’s sake, watch your language!” Avengers: Age of Ultron

“[stabbed by Hulk] Right in the back? Dick move, Banner.” Avengers: Age of Ultron

“[as Thor leaves a Bifrost mark] That man has no respect for lawn maintenance.” Avengers: Age of Ultron

“I’m sorry, Earth is closed today. You better pack it up and get outta here.” Avengers: Infinity War

“[Bruce is struggling to Hulk out] Dude, you’re embarrassing me in front of the wizards.” Avengers: Infinity War

“Ebony Maw: Stonekeeper, does this chattering animal speak for you?
Dr. Stephen Strange: Certainly not, I speak for myself. You are trespassing in this city and on this planet.
Tony Stark: That means get lost, Squidward!” Avengers: Infinity War

“Spider-Man: Let me just say, if aliens wind up implanting eggs in my chest, or something and I eat one of you, I’m sorry.
Iron Man: I do not want another single pop culture reference out of you for the rest of the trip. Do you understand?” Avengers: Infinity War

“Scott Lang: If you do this and it doesn’t work, you’re not coming back.
Tony Stark: [nervous] Thanks for the pep talk, piss-ant.” Avengers: Endgame

Very occasionally Tony Stark lets go of his bravado and quippy comebacks to say something that shows his more vulnerable side. These are the saddest lines from Iron Man that tug at the heart strings.

“You experience things and then they’re over, and you still can’t explain them. Gods, aliens, other dimensions. I’m just a man in a can. The only reason I haven’t cracked up is probably because you moved in. Which is great. I love you. I’m lucky. But honey, I can’t sleep. You go to bed, I come down here. I do what I know. I tinker. I… Threat is imminent. And I have to protect the one thing that I can’t live without. That’s you. And my suits, they’re, uh… Machines. They’re part of me.” Iron Man 3

The Most Profound Lines from Iron Man

Don’t forget, Tony Stark IS a genius, so it’s not surprising that sometimes what he says actually makes you think. These are the most profound and philosophical quotes from Iron Man that show the brain behind the banter.

“Is it better to be feared or respected? I say, is it too much to ask for both?” Iron Man

“Jarvis… sometimes you gotta run before you can walk.” Iron Man

“Pepper Potts: You’re going to kill yourself, Tony. I’m not going to be a part of it.
Tony Stark: I shouldn’t be alive… unless it was for a reason. I’m not crazy, Pepper. I just finally know what I have to do. And I know in my heart that it’s right.” Iron Man

“Following’s not really my style.” The Avengers

“Tony Stark: Hey, I’ve read all about your accident. That much gamma exposure should have killed you.
Bruce Banner: So you’re saying that the Hulk… the other guy… saved my life? That’s nice. It’s a nice sentiment. Save it for what?
Tony Stark: I guess we’ll find out.” The Avengers

“Steve Rogers: You think Fury’s hiding something?
Tony Stark: He’s a spy. Captain. He’s THE spy. His secrets have secrets.” The Avengers

“Gimme a break! I’m doing what has to be done, to save us from something worse.” Captain America: Civil War

“We need to be put in check! And whatever form that takes, I’m game. If we can’t accept limitations, we’re boundaryless, we’re no better than the bad guys.” Captain America: Civil War

“If you’re nothing without this suit, then you shouldn’t have it, okay?” Spiderman: Homecoming

“I just want peace. Turns out resentment is corrosive, and I hate it.” Avengers: Endgame

“No amount of money ever bought a second of time.” Avengers: Endgame

Did We Miss Any of Your Favourite Iron Man/Tony Stark Quotes?