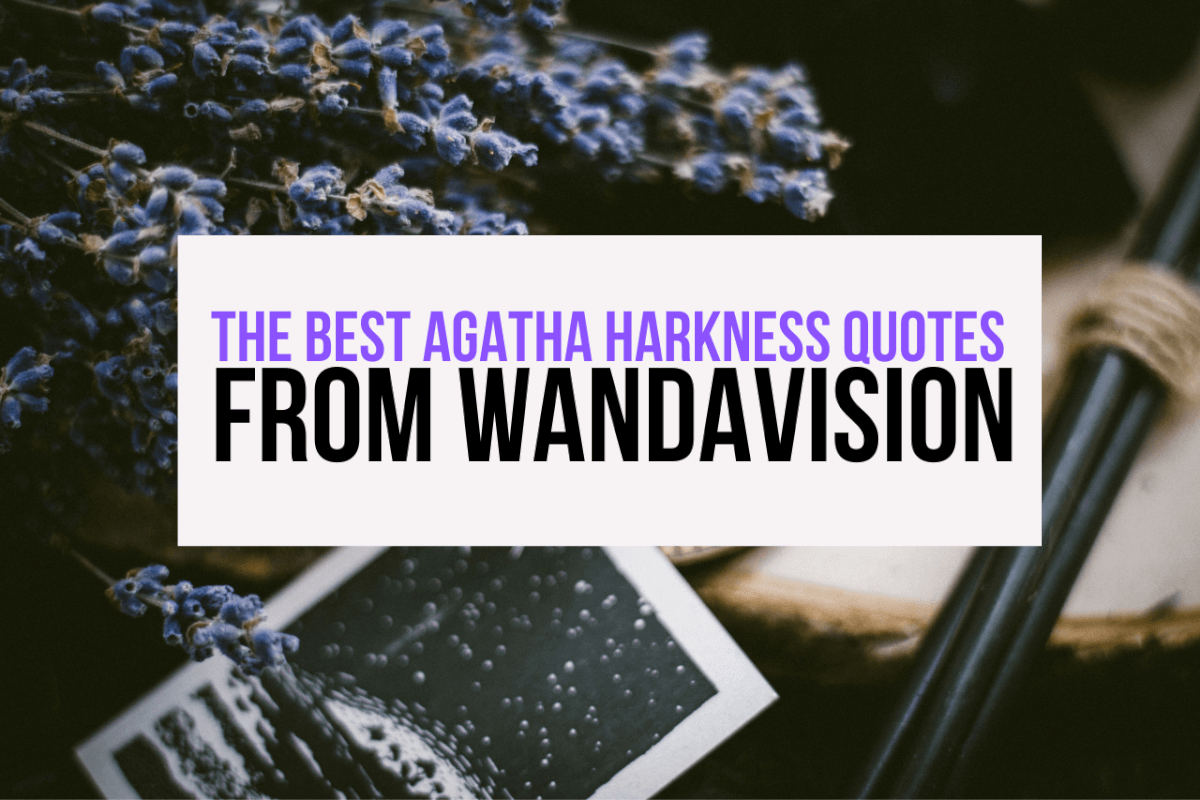 WARNING – Spoilers for WandaVision Season 1 below! Do not read until you’ve caught up to Episode 8.

Who’s been messing up everything?

IT’S BEEN AGATHA ALL ALOOOOOONG.

If you’re up to date with WandaVision, this absolute bop of a song is probably playing on repeat in your head.

But hey, besides that super catchy villain intro, Agatha Harkness has blessed us with plenty of amazing lines and quotes.

So, in honor of the absolute queen that is Agatha Harkness, here are some of her best quotes and lines from WandaVision. Enjoy!

The Most Iconic Agatha Harkness Quotes and Lines from WandaVision

Looking for the best, most memorable lines from Agatha Harkness? Here they are.

“Agnes: Wanda, Wanda. You didn’t think you were the only magical girl in town, did you? The name’s Agatha Harkness. Lovely to finally meet you, dear.”  Episode 7, “Breaking the Fourth Wall”

“Agatha: It’s been Agatha all along.” Episode 7, “Breaking the Fourth Wall”

“Agatha: And I killed Sparky, too.” Episode 7, “Breaking the Fourth Wall”

“Agatha: That accent really comes and goes, doesn’t it?” Episode 8, “Previously On”

“Agatha: My thoughts are not available to you, toots. They never, ever were. So don’t go givin’ yourself a migraine.” Episode 8, “Previously On”

“Agatha: These are runes, Wanda.
In a given space, only the witch that cast the runes can use her magic.
How do you not know the fundamentals?” Episode 8, “Previously On”

“Agatha: All those costumes and hairstyles. I was so patient, waiting for you to reveal your true self. I got close with fake Pietro. Fietro, if you will, but no dice.” Episode 8, “Previously On”

“Agatha: Necromancy was a non-starter since your real brother’s body is on another continent. Not to mention, full of holes. But you’re so crippled by your own self-doubt that you believed it. Oh, Wanda, oh, when I sensed this place, the afterglow of so many spells cast all at once… Oh, I couldn’t make heads or tails of it.” Episode 8, “Previously On”

“With thousands of people under your thumb, all interacting with each other according to complex storylines. Well, that’s something special, baby.” Episode 8, “Previously On”

“I tried to be gentle, to nudge you awake from this ridiculous fantasy, but you would rather fall apart than face your truth. You left me no choice. What was it you said to your not-brother? Hmm? All you could recall was the feeling. You felt empty. Alone. Endless nothingness. Let’s start there.” Episode 8, “Previously On”

“Agatha: It’s been fun playing pretend for a while, hasn’t it, Wanda? But it’s time to look at some real reruns.” Episode 8, “Previously On”

“Agatha: So, what I see here is a baby witch, obsessed with sitcoms and years of therapy ahead of her. Doesn’t explain your recent hijinks. Where’d you get the big guns, Wanda?” Episode 8, “Previously On”

“Agatha: Quick question, your reaction to the bombing of your civilian apartment building and the murder of your parents was to join an anti-freedom terrorist organization.” Episode 8, “Previously On”

“Agatha: So, little orphan Wanda got up close and personal with an Infinity Stone that amplified what, otherwise, would’ve died on the vine.

The broken pieces of you are adding up, buttercup.

I have a theory, but I need more.” Episode 8, “Previously On”

“Agatha: You have no idea how dangerous you are.
You’re supposed to be a myth.
A being capable of spontaneous creation, and here you are, using it to make breakfast for dinner.” Episode 8, “Previously On”

“Agatha: Your children. And Vision, and this whole little life you’ve made, this is Chaos Magic, Wanda. And that makes you the Scarlet Witch.” Episode 8, “Previously On”

“Wanda: My powers work out here, or did you forget?

“Agatha: I take power from the undeserving. It’s kinda my thing.” Episode 9, “The Series Finale”

“Agatha: Oh, this is awkward. Your ex and your boyfriend together at the same party. Who are you gonna choose, Wanda?” Episode 9, “The Series Finale”

“Agatha: Your power exceeds that of the Sorcerer Supreme. It’s your destiny to destroy the world.” Episode 9, “The Series Finale”

“Wanda: What are you doing to her? You’re making her say this.

“Agatha: What’s stopping you? Use your power and do it now. Heroes don’t torture people.” Episode 9, “The Series Finale”

“Agatha: Same story, different century. There’ll always be torches and pitchforks for ladies like us, Wanda.” Episode 9, “The Series Finale”

“Agatha: About our deal… Once cast, a spell can never be changed. This world you made will always be broken. Just like… you.” Episode 9, “The Series Finale”

Before we had Agatha, we were blessed with Agnes. Here are some of our favorite Agnes lines from WandaVision.

“Agnes: Forgive me for not stopping by sooner to welcome you to the block. My mother-in-law was in town, so I wasn’t.” Episode 1, “Filmed Before a Live Studio Audience”

“Agnes: The only way Ralph would remember our anniversary is if there was a beer named June 2nd.” Episode 1, “Filmed Before a Live Studio Audience”

“Wanda: Any other tricks?
Agnes: You could point out that the death rate of single men is twice that of married men.
Wanda: Now, that’s romantic.” Episode 1, “Filmed Before a Live Studio Audience”

“Agnes: What kind of housewife would I be if I didn’t have a gourmet meal for four just lying about the place?” Episode 1, “Filmed Before a Live Studio Audience”

“Agnes: Wanda, can I give you a bit of friendly advice?
Wanda: Is it about the way how I’m dressed?
Agnes: Yes, but it’s too late for that.” Episode 2, “Don’t Touch That Dial”

“Agnes: Just mind your P’s and Q’s and you’re gonna do just fine.
Wanda: Or maybe I could just be myself? More or less?
Agnes: [Laughs] Oh, Wanda, that’s good.” Episode 2, “Don’t Touch That Dial”

“Dottie: The devil’s in the details, Bev.
Agnes: That’s not the only place he is.” Episode 2, “Don’t Touch That Dial”

“Vision: I will now make my wife… disappear.
Agnes: Are you sure you don’t want an audience volunteer named “My husband Ralph?” Episode 2, “Don’t Touch That Dial”

“Vision: Did you lose power, too?
Agnes: Oh, sure did. But Ralph looks better in the dark, so I’m not complaining.” Episode 3, “Now in Color”

“Agnes: Um… Uh… Do you want me to take that again?
Wanda: Uh… I’m sorry?
Agnes: You want me to hold the babies. Should we just take it from the top?” Episode 5, “On a Very Special Episode…”

“Agnes: Am I dead?
Vision: No, no. Why would you think that?
Agnes: Because you are.” Episode 6, “All-New Halloween Spooktacular!”

“Agnes: Dead. Dead. Dead! Dead!
Vision: Agnes, it is my intention to reach those outside of Westview and make sense of our situation.
Agnes: How? No one leaves. Wanda won’t even let us think about it. All is lost.” Episode 6, “All-New Halloween Spooktacular!”

“Agnes: I actually did bite a kid once.” Episode 7, “Breaking the Fourth Wall”

“Agnes: Hiya, hon. Say, that’s some kinda getup you’re wearing. Did I leave the oven on, or is that just you, hot stuff?” Episode 9, “The Series Finale”

Did we miss any of your favorite Agatha or Agnes Quotes?