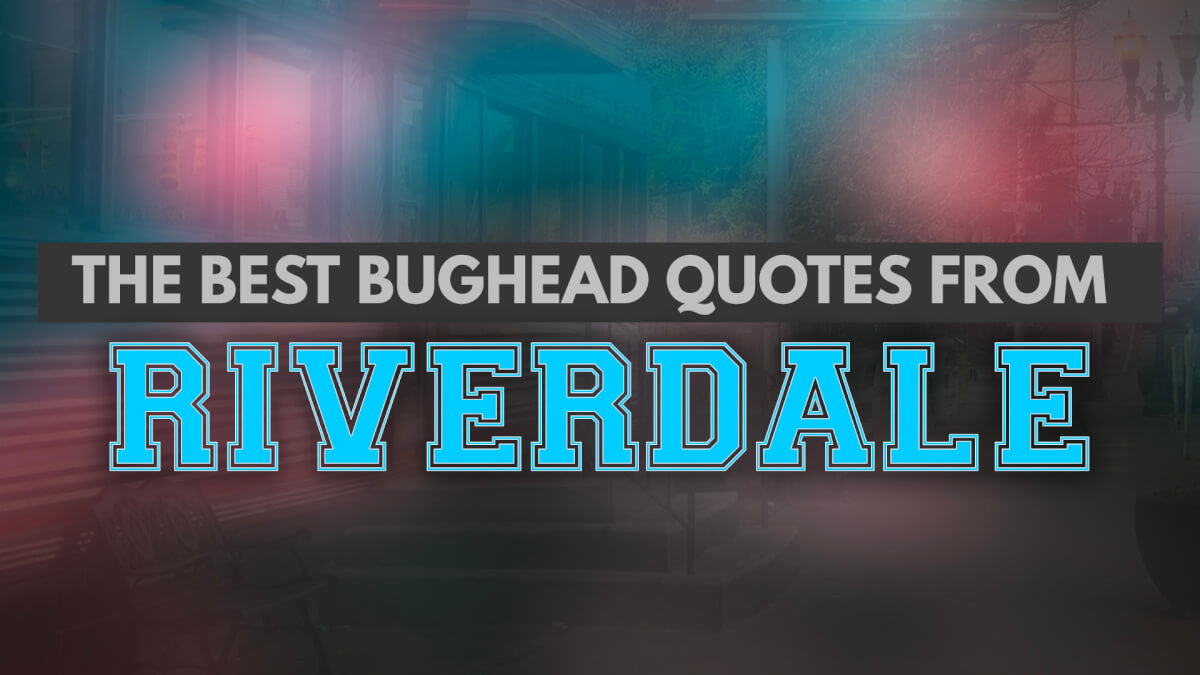 As far as ships go in Riverdale, we’d say few couples are as quotable as the iconic Betty and Jughead (played by Lili Reinhart and Cole Sprouse), so why not unveil an entire list dedicated to our favourite Bughead quotes?

In this article, you’ll find the best Bughead lines from the past few seasons of Riverdale, all broken up into different categories, from the cringey and cheesy to the fun, flirty, and romantic.

Let us know if we’ve missed any of your favourite Bughead quotes below! Enjoy.

Riverdale knows how to serve up some serious cheese, but hey, if it’s Betty and Jughead… we’ll allow it. Here are some of the cheesiest Bughead quotes from Riverdale so far, perfect for fan art, videos or just some second hand warm fuzzies:

“Jughead: I wish we could just go. Just hop on a motorcycle and just leave Riverdale. Go someplace where there’s no Northside, or Southside…or Serpents, Ghoulies.

Betty: No… crazy moms, no Black Hoods. Like Romeo and Juliet, but we live happily ever after instead.” Season 2, Episode 5 “Chapter Eighteen: When a Stranger Calls”

“Betty: Jug, what’s up?
Jughead: Nothing, I was just calling to say good night. And, uh… I love you.” Season 2, Episode 13 “Chapter Twenty-Six: The Tell-Tale Heart”

Jughead: I just want to let you know that I love you. I’ll never stop loving you.” Season 2, Episode 21 “Chapter Thirty-Four: Judgment Night”

“Now that I am the Serpent King… I was wondering how you felt about being my queen.” Season 2, Episode 22 “Chapter Twenty-Two: Silent Night, Deadly Night”

“Jughead: Betty, we’re gonna get through it. From now on, we’re partners. In Serpents, in life, all of it. Okay?”  Season 3, Episode 1 “Chapter Thirty-Six: Labor Day”

“Veronica: Prom is this weekend? We still do things like that here?

Betty: I mean, apparently. Jug… Will you go to prom with me?

“Jughead: You still okay with this?

Jughead: Well, you better take your breaks from me while you can, Cooper. Cause you and I are in this for the long haul. Okay?” Season 4, Episode 3 “Chapter Sixty: Dog Day Afternoon”

“Jughead: I’m in serious need of my real life Tracy True. How quickly can you get to Stonewall Prep?” Season 4, Episode 13 “Chapter Seventy: The Ides of March”

“Jughead: Betty Cooper, you take my breath away.

The Best Examples of Bughead Banter

In Riverdale, fun back and forths are a Bughead specialty. Here are some of our favourite (quick-witted) Jughead and Betty exchange.

“Betty: You’re sweet to be here. I know this isn’t exactly your scene.

“Betty: My parents are unbelievable, Jug. Polly is locked up in that house like a character out of Jane Eyre, and what are they doing? Changing each other’s login accounts and throwing bricks through windows.

“Betty: I told her I wouldn’t do it. Not unless you’re up there with us, Jug.

Jughead: I appreciate the righteous indignation, Betty, I do, but Jubilees aren’t my thing.” Season 1, Episode 13 “Chapter Thirteen: The Sweet Hereafter”

“Jughead: You’re not one of the bad guys. You’re Betty Cooper. Like Nancy Drew meets Girl with the Dragon Tattoo.” Season 2, Episode 4 “Chapter Seventeen: The Town That Dreaded Sundown”

“Betty: Before you get in the car, I need you to know… I never stopped loving you, Jug. I’m not sure I can. Also remember, don’t ride the clutch, and don’t let it slip between gear shifts.

“Jughead: I was also thinking that maybe you and I could investigate this together, for old times’ sake. Or at least until we catch a new lead with Archie’s case.

Betty: I like that idea. I’ll try to see if Dr. Curdle can get us into the coroner’s office.

Jughead: Have more romantic words ever been spoken?

“Betty: Even by our standards, this was a pretty crazy week.

Jughead: Well, pretending to be dead is one thing, but hiding under a cot in this sex bunker of death… while you make out with Archie just to convince a bunch of evil preppies that I did die? Yeah, definitely cracks the top-10 craziest things.” Season 4, Episode 15 “Chapter Seventy-Two: To Die For”

“Betty: Conspiracy theories and a murder mystery to solve. Sounds like a romantic getaway to me.

Jughead: All right. I love you, see you later.” Season 4, Episode 7 “Chapter Sixty-Four: The Ice Storm”

“Jughead: How about… I just raid the vending machine?

Betty: Yes. I can finally live out my Charlie Brown fantasy of having junk food for Thanksgiving dinner. Yes! Okay, I will have Stonewall’s finest chocolate chip cookies, chips, soda and candy, please. Get yourself something too.“ Season 4, Episode 7 “Chapter Sixty-Four: The Ice Storm”

Bughead Moments That Prove They Have Each Other’s Backs 100%

Bughead shippers will likely agree that one of the best part of the Betty/Jughead pairing is that they seem to always have each other’s backs and will support each other through thick and thin. Here are some great quotes that remind you of just that:

“Betty: Look, there’s a lot I can’t do, a lot I can’t control. But I can damn well make sure my boyfriend has the best birthday of his life.” Season 1, Episode 10 “Chapter Ten: The Lost Weekend”

“Jughead: Betty, I’m not one of your projects, okay? Like solving Jason’s murder…

Betty: No. You’re not a project, you’re my boyfriend.” Season 1, Episode 10 “Chapter Ten: The Lost Weekend”

“Betty: I love Jughead. He’s as much my family as you are, more so right now.” Season 1, Episode 11 “Chapter Eleven: To Riverdale and Back Again”

“Jughead: Betty, the Southside is where the powers that be want me. Maybe I wanna be here as well. I may blend in better here. And it would keep you safe.

“Jughead: Nobody could’ve survived that.

Betty: Yeah, but if he did…

Jughead: If he did, you’ve got me, you have the Serpents, you have Archie and his fight-club buddies. You have a veritable armada here to protect you.” Season 3, Episode 20 “Chapter Fifty-Five: Prom Night”

Jughead: Really? You think it’s worth submitting to the contest?

Betty: No, I think it’s gonna win the contest.

Jughead: I love you.

Betty: I love you, too.” Season 4, Episode 1 “Chapter Fifty-Eight: In Memoriam”

“Betty: You should go to Stonewall Prep, Jug. I hate saying that, but it’s the chance of a lifetime and you should take it. Okay? So, you should go before I change my mind.” Season 4, Episode 2 “Chapter Fifty-Nine: Fast Times at Riverdale High”

“Betty: Jug, we would make anything work. Okay? But I would miss you.” Season 4, Episode 2 “Chapter Fifty-Nine: Fast Times at Riverdale High”

Betty: I mean, I fully spiraled in a cemetery.

Jughead: No, you had a human reaction to a situation that was totally out of your control. I’m sorry that I wasn’t there for you when you needed me.

Betty: I love you. I really hate when we fight. You deserve Yale, Jug. And I’m so happy for you.“ Season 4, Episode 11 “Chapter Sixty-Eight: Quiz Show”

“Jughead: Are you still gonna make it? Even with this biblical ice storm that they’re predicting?

Betty: Jug, I don’t care what my mom or the weatherman are saying. There’s zero chance that I’m not seeing you this weekend.

Jughead: Well, then hurry up and get here already.” Season 4, Episode 7 “Chapter Sixty-Four: The Ice Storm”

Cheesy lines and banter aside, we do feel like there were some points when the writers really did do Bughead justice and showed the realness of a mature relationship. Here are some quotes that we love that reflect that:

“Betty: And all this time, I thought you were a lover, not a fighter.

Jughead: I’m both. I’ve got layers. You were doing something nice, it’s just that sometimes, when people do nice things for me, I short circuit. Maybe I’m not used to it. Maybe I’m scared. Of getting hurt. Or being rejected for being myself.” Season 1, Episode 10 “Chapter Ten: The Lost Weekend”

“Jughead: It’s like every decision I’ve made since we broke up, including our break up, just makes things worse and worse.” Season 2, Episode 12 “Chapter Twenty-Five: The Wicked and the Divine”

“Betty: Come back to me, Jug. We’re not done yet, do you hear me? Our story’s not over. It’s just beginning. So you come back to me. Okay?” Season 2, Episode 22 “Chapter Twenty-Two: Silent Night, Deadly Night”

“Betty: I feel guilty that I wasn’t there for you, Jug.

Jughead: No. Well, actually, you were there for me. Thinking about you was the only thing that kept me from losing hope. And my sanity. I think deep down, I know that if I ever really went missing, that you would be the one to find me.

While Riverdale can indeed be a heavy show, the flirty fun moments between Betty and Jughead are some of our favourites. Here are some Bughead flirty classics:

“Betty: If I was upset about anything, it was that I had to hear about your birthday from Archie and not you, Jug.

Jughead: [SIGHS] Yeah, well… I didn’t think you were an American Werewolf kind of girl.

“Jughead: You worried about me?

Jughead: I thought you liked me reckless” Season 2, Episode 3 “Chapter Sixteen: The Watcher in the Woods

“Jughead: I’m having writer’s block. Why?

Betty: My advice, just take a break. Okay? Take a walk. Look at some art. Kiss your girlfriend.

Jughead: I keep thinking I should be breaking the Baxter Brothers novels down like, scientifically, or something.

Betty: That could work, but you could also… kiss your girlfriend.” Season 4, Episode 6 “Chapter Forty-One: Manhunter”

“Betty: Why are you smiling?

Jughead: Just everything. You’re here, I turned in my draft for the Baxter Brothers book. And Yale said…

Betty: Yale said what? … Did you get accepted into Yale and not tell me?

Jughead: Yeah, I think I did.

Jughead: Are you okay?

The Best Quotes About Bughead From Other Characters

Lastly, sometimes other characters just say it best. Here are some Bughead-centric quotes from other Riverdale cast members.

“Cheryl: False. You’ve been in love with the idea of Archie. The idea of the perfect romance. But… that wasn’t real. That was fantasy. But in this town of nightmares, you and Jughead found each other. That’s real. That’s maybe even… dare I say, endgame?” Season 4, Episode 18 “Chapter Seventy-Five: Lynchian”

Did we miss any of your favourite Bughead quotes from Riverdale?

Let us know in the comments! And feel free to browse the articles linked below for more Riverdale inspiration.

All our BEST Riverdale posts: