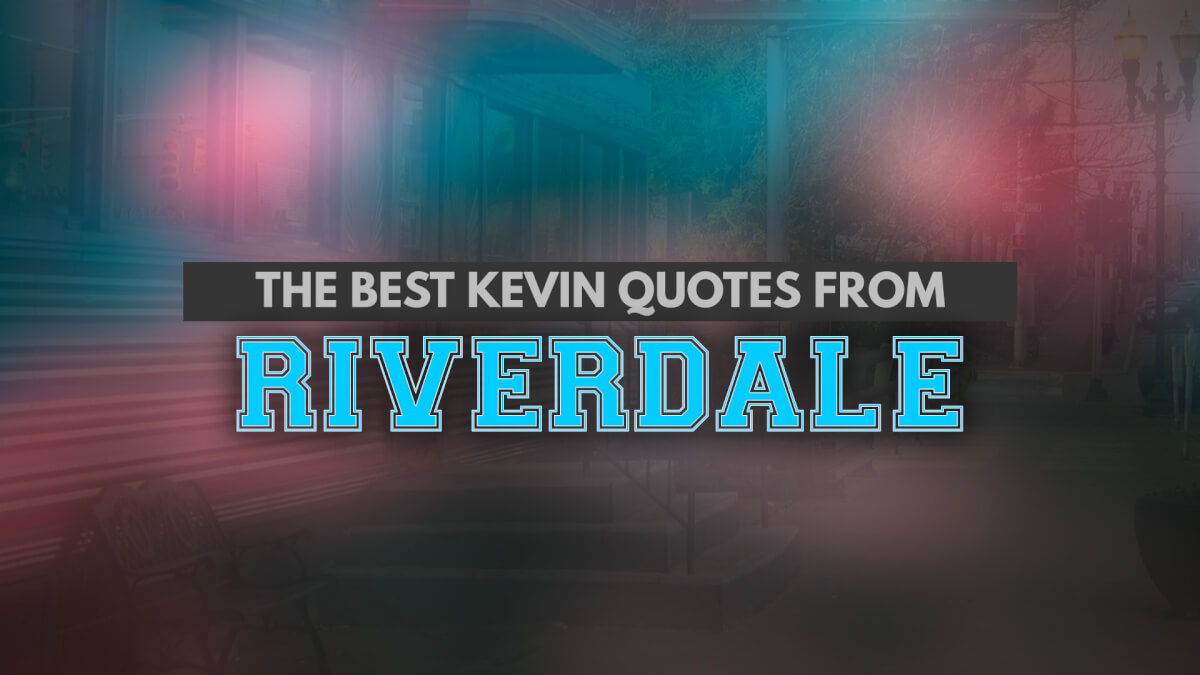 In the world of Riverdale, one of the most underrated characters in the entire cast is our beloved Kevin Keller (played by Casey Cott), who, as many fans will agree, is constantly being done wrong by the writers’ team…

BUT in spite of travesties like Ticklegate, Kevin has still managed to shine through and provide us with some of our most beloved Riverdale lines of all time. So, in this article, you’ll find some of our favourite Riverdale moments from Kevin Keller, filled with fun Kevin lines and quotes that will remind you exactly why he deserves more screentime!

PS: You might also like this full roundup of Riverdale quotes here, which lists all our favourite quotes from the series.

There are some lines from Kevin that are just instant classics. Here are some of our favourite iconic Kevin quotes from Riverdale:

“Kevin: Are we 100% sure that Archie’s straight? Because no straight man has that body.” Season 1, Episode 2 “Chapter Two: A Touch of Evil”

“Kevin: Betty, don’t take this the wrong way, but how many years did I listen to you go on about Archie and Jughead? Did you ask my permission to date them? No. You didn’t need it. And I don’t need yours.” Season 2, Episode 3 “Chapter Sixteen: The Watcher in the Woods

“Kevin: You act like we’ve got the same set of options, but we don’t. You live in this pale-pink world of milk shakes and first kisses and “Am I gonna date Archie or Jughead?”

Cheryl: Except for when she’s Dark Betty.

There were definitely times throughout the show that it felt like the only person who made any sense in the world was Kevin. Here are some of our favourite Kevin quotes that prove this.

“Kevin: He’s a psychopath, Betty, and you are in high school, not the FBI.” Season 2, Episode 4 “Chapter Seventeen: The Town That Dreaded Sundown”

“Kevin: This school is insane.” Kevin (after witnessing a mercenary almost killing Archie in the school bathroom)

“Kevin: Why does every date I go on have to get super weird?” Season 4, Episode 11 “Chapter Sixty-Eight: Quiz Show”

Last but not least, here are some amazing quotes that are just oh so Kevin.

“Kevin: Archie’s swell. But like most millennial straight guys, he needs to be told what he wants, so tell him. Finally.” Season 1, Episode 1 “Chapter One: The River’s Edge”

“Kevin: To clarify. Betty and Archie aren’t dating, but they are endgame.” – Season 1, Episode 1 “Chapter One: The River’s Edge”

“Kevin: Any other year, you’d be trending Number One, for sure. This year, though, it’s all about Cheryl trying to win the Best Supporting Psycho Oscar for her role as Riverdale’s bereaved Red Widow. – Season 1, Episode 1 “Chapter One: The River’s Edge”

“Kevin: Betty, you will not believe who just propositioned me in the bathroom. Give you a hint: His name may be Moose, but I’d describe a certain appendage of his as horse-like.” Season 1, Episode 1 “Chapter One: The River’s Edge”

“Archie: You wanna go to prom with me, Jug?

Jughead: I’d be honored. But I’m not putting out.

“Kevin: Moose, putting aside what Cheryl did, we’ve been together for a while now, and I can’t keep playing Brokeback Riverdale with someone who’s in the closet.”  Season 3, Episode 12 “Chapter Forty-Seven: Bizarrodale”

“Kevin: I’m no expert, Betty, but… it doesn’t sound like Charles is a serial killer. Kinda just sounds like, he’s a… a lonely gay guy.” Season 4, Episode 6 “Chapter Forty-One: Manhunter”

“You had me at snuff film.” Season 5, Episode 1, “Chapter Seventy-Seven: Climax”

Did We Miss Any of Your Favourite Kevin Quotes from Riverdale?

Let us know in the comments, and be sure to browse more of our ultimate quote roundups below!

All our BEST Riverdale posts: