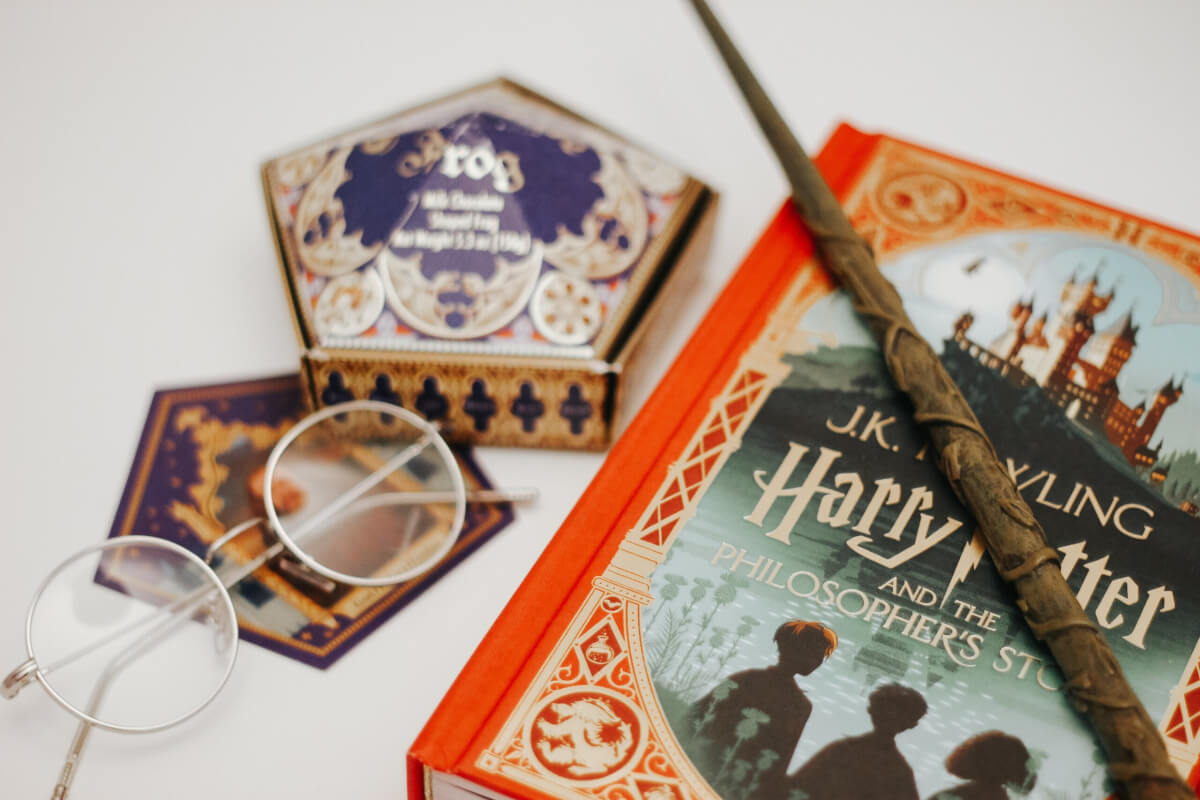 While the Harry Potter series was primarily an entertaining fantasy (with many light-hearted moments) it also dealt with more serious ideas – like good vs. evil, honesty, bravery and friendship.

This also means that the many characters have spoken some profound and even inspiring lines, the kinds of quotes that would look great on a poster or a card, while also just being good reminders about what’s really important in life.

We’ve assembled this list of all the best and most inspiring lines from ALL the Harry Potter films – as well as the books, for when you need a bit of inspiration.

Read on to find that perfect quote from your favorite character that you’re totally going to want to put in your yearbook, or next Instagram post!

The very first film was mostly about Harry discovering the magic of the wizarding world, but it did give us some of Dumbledore’s wisest lines, along with a pretty famous one of Hermione’s. Here are the most inspiring lines from Harry Potter and the Sorcerer’s Stone.

“Professor McGonagall: This boy will be famous. There won’t be a child in our world who doesn’t know his name.
Dumbledore: Exactly. He’s far better off growing up away from all of that. Until he is ready.”

“Albus Dumbledore: It does not do to dwell on dreams, Harry, and forget to live.”

“Hermione: You’ll be okay, Harry. You’re a great wizard. You really are.
Harry: Not as good as you.
Hermione: Me? Books and cleverness. There are more important things: friendship and bravery.”

“Dumbledore: No, no. This kind of mark cannot be seen. It lives in your very skin.
Harry: What is it?
Dumbledore: Love, Harry. Love.”

Similarly to the first film, Harry’s second adventure’s most inspiring lines mostly came from Dumbledore, which is kind of expected when he’s the wise old headmaster to the antics of tween Harry and his friends. These are the best inspiring quotes from Harry Potter and the Chamber of Secrets.

“Hermione: Fear of a name only increases fear of the thing itself.”

“Albus Dumbledore: You will find that help will always be given at Hogwarts to those who ask for it.”

“Albus Dumbledore: It is not our abilities that show what we truly are. It is our choices.”

As the children begin to get older and meet other adults, we’re finally blessed with some wisdom from other characters besides Dumbledore, although he also features here too, of course! But the newly introduced characters of Remus and Sirius helped bring some more, much-needed, father figures to Harry’s life. Enjoy these most inspiring quotes from Harry Potter and the Prisoner of Azkaban.

“Albus Dumbledore: Happiness can be found even in the darkest of times, when one only remembers to turn on the light.”

“Albus Dumbledore: A child’s voice, however honest and true, is meaningless to those who’ve forgotten how to listen.”

“Hermione: If you’re going to kill Harry you’ll have to kill us, too!”

“Sirius Black: That was a noble thing you did back there. He doesn’t deserve it.
Harry: Well, I just didn’t think my dad would’ve wanted his two best friends to become killers. Besides, dead the truth dies with him. Alive, you’re free.”

“Sirius Black: You know the man you truly are, Remus! This heart is where you truly live!”

“Dumbledore: Mysterious thing, time. Powerful, and when meddled with, dangerous.”

“Sirius Black: But know this; the ones that love us never really leave us. And you can always find them in here. [puts his hand to Harry’s heart]”

“Professor Lupin: Didn’t make any difference? Harry, it made all the difference in the world! You helped discover the truth. You saved an innocent man from a terrible fate. It made a great deal of difference.”

As the series got darker it also gained more action, which might be why there were slightly fewer stirring speeches in this particular film. There are still plenty of lines worth remembering though, and here are the best inspiring quotes from Harry Potter and the Goblet of Fire.

“Albus Dumbledore: You fail to recognize that it matters not what someone is born, but what they grow to be.”

“Albus Dumbledore: Curiosity is not a sin, Harry. However, from time to time, you should exercise caution.”

“Ron: Do you think we’ll ever just have a quiet year at Hogwarts?
Hermione and Harry : No.
Ron: Yeah, didn’t think so. Oh well, what’s life without a few dragons?”

“Albus Dumbledore: Soon we must all face the choice between what is right and what is easy.”

“Albus Dumbledore: Now the pain we all feel at this dreadful loss reminds me, and, reminds us, that though we may come from different countries and speak in different tongues, our hearts beat as one.”

Life gets harder as you get older, a fact illustrated in the fifth Harry Potter film. But with more difficult problems come more creative solutions and lines to inspire others to greatness. These are the most inspiring quotes from Harry Potter and the Order of the Phoenix.

“Sirius Black: I had to see you off, didn’t I? What’s life without a little risk?”

“Harry Potter: Working hard is important, but there’s something that matters even more. Believing in yourself. Think of it this way: Every great wizard in history has started out as nothing more than we are now. Students. If they can do it, why not us?”

“Sirius Black: I want you to listen to me very carefully, Harry. You’re not a bad person. You’re a very good person, who bad things have happened to. Besides, the world isn’t split into good people and Death Eaters. We’ve all got both light and dark inside us. What matters is the part we choose to act on. That’s who we really are.”

“Luna Lovegood: Anyway, my mum always said things we lose have a way of coming back to us in the end. If not always in the way we expect.”

“Harry Potter: I’ve been thinking about something Dumbledore said to me.
Hermione Granger: What’s that?
Harry Potter: That even though we’ve got a fight ahead of us, we’ve got one thing that Voldemort doesn’t have.
Ron Weasley: Yeah?
Harry Potter: Something worth fighting for.”

As Harry ventures back in time through memories to uncover Voldemort’s secrets, we have arguably one of the saddest moments of the series in the sixth film. Even in sadness and death, there is wisdom and inspiration to be found though! Here are the most inspiring quotes from Harry Potter and the Half-Blood Prince.

“Remus Lupin: It comes down to whether or not you trust Dumbledore. Dumbledore trusts Snape, therefore I do.”

“Horace Slughorn: Farewell, Aragog. King of the arachnids. Your body will decay… but your spirit lingers on and your human friends find solace, for the loss they have sustained.”

“Harry Potter: [talking to Slughorn] Be brave, Professor. Be brave like my mother… Otherwise, you disgrace her. Otherwise, she died for nothing. Otherwise, the bowl will remain empty… forever.”

“Albus Dumbledore: I often talk aloud to myself. I find it extraordinarily useful.”

The Best Inspirational Quotes and Lines from Harry Potter and the Deathly Hallows: Part 1

While the two parts of the Deathly Hallows films are often darker and sadder than the rest of the series, that just means there’s even more opportunities for rousing speeches or inspiring lines from the characters. Here are the most unforgettable and inspiring quotes from Harry Potter and the Deathly Hallows: Part 1.

“Ron Weasley: You’re amazing, you are!”

“Hermione Granger: [Entering Godric’s Hollow] I still think we should have used Polyjuice Potion.
Harry Potter: No. This is where I was born. I’m not returning as someone else.”

“Ron Weasley: [about Hermione] How long do you reckon she’ll stay mad at me?
Harry Potter: Well, just keep talking about that little ball of light touching your heart, and she’ll come ’round.
Ron Weasley: It was true, every word. This is gonna sound crazy, but I think that’s why Dumbledore left it to me, the Deluminator. I think he knew that somehow I’d need it to find my way back, and she’d lead me.”

“Bellatrix Lestrange: How dare you defy your masters!
Dobby the House Elf: Dobby has no master. Dobby is a free elf, and Dobby has come to save Harry Potter and his friends!”

The Best Inspirational Quotes and Lines from Harry Potter and the Deathly Hallows: Part 2

The final instalment in Harry’s adventures has some of the most famous and profound lines, even some that are uttered by characters after death! These are the most inspiring quotes from Harry Potter and the Deathly Hallows: Part 2.

“Ron Weasley: We can end this.”

“Albus Dumbledore: Do not pity the dead, Harry. Pity the living and above all, those who live without love.”

“Albus Dumbledore: Words are, in my not-so-humble opinion, our most inexhaustible source of magic. Capable of both inflicting injury, and remedying it.”

“Albus Dumbledore: Of course it is happening inside your head, Harry, but why on earth should that mean it is not real?”

“Neville Longbottom: It doesn’t matter that Harry’s gone.
Seamus Finnigan: Stand down Neville!
Neville Longbottom: [defiantly, turns to everyone]  People die every day! Friends, family… Yeah. We still lost Harry tonight. But he’s still with us–in here. [Points to his heart] So’s Fred, Remus, Tonks… all of them. They didn’t die in vain. [turns to Voldemort and his Death Eaters] But YOU will. Because you’re wrong!”

“Molly Weasley: Not my daughter, you bitch!”

Bonus: The Most Inspirational Harry Potter Quotes from the Books

As with all our Harry Potter quotes posts, there are some lines from the books that don’t make it into the films, often due to film running time constraints. Never fear though, we’ve also rounded up the most inspiring lines from the Harry Potter books for you right here!

“Albus Dumbledore: The truth. It is a beautiful and terrible thing, and should therefore be treated with great caution.” Harry Potter and the Sorcerer’s Stone

“Albus Dumbeldore: To the well-organized mind, death is but the next great adventure.” Harry Potter and the Sorcerer’s Stone

“Ron Weasley: [about Hermione] When in doubt, go to the library.” Harry Potter and the Chamber of Secrets

“Ron Weasley: Don’t let the muggles get you down.” Harry Potter and the Prisoner of Azkaban

“Sirius Black: If you want to know what a man’s like, take a good look at how he treats his inferiors, not his equals.” Harry Potter and The Goblet of Fire

“Rubeus Hagrid: I am what I am an’ I’m not ashamed. ‘Never be ashamed,’ my ol’ dad used ter say, ‘there’s some who’ll hold it against you, but they’re not worth botherin’ with.’” Harry Potter and The Goblet of Fire

“Albus Dumbledore: Age is foolish and forgetful when it underestimates youth.” Harry Potter and the Half-Blood Prince

“Albus Dumbledore: It is the unknown we fear when we look upon death and darkness, nothing more.” Harry Potter and the Half-Blood Prince

“Kingsley Shacklebolt: We are all human, aren’t we? Every human life is worth the same, and worth saving.” Harry Potter and The Deathly Hallows

Did We Miss Any of Your Favorite Inspirational Harry Potter Quotes?