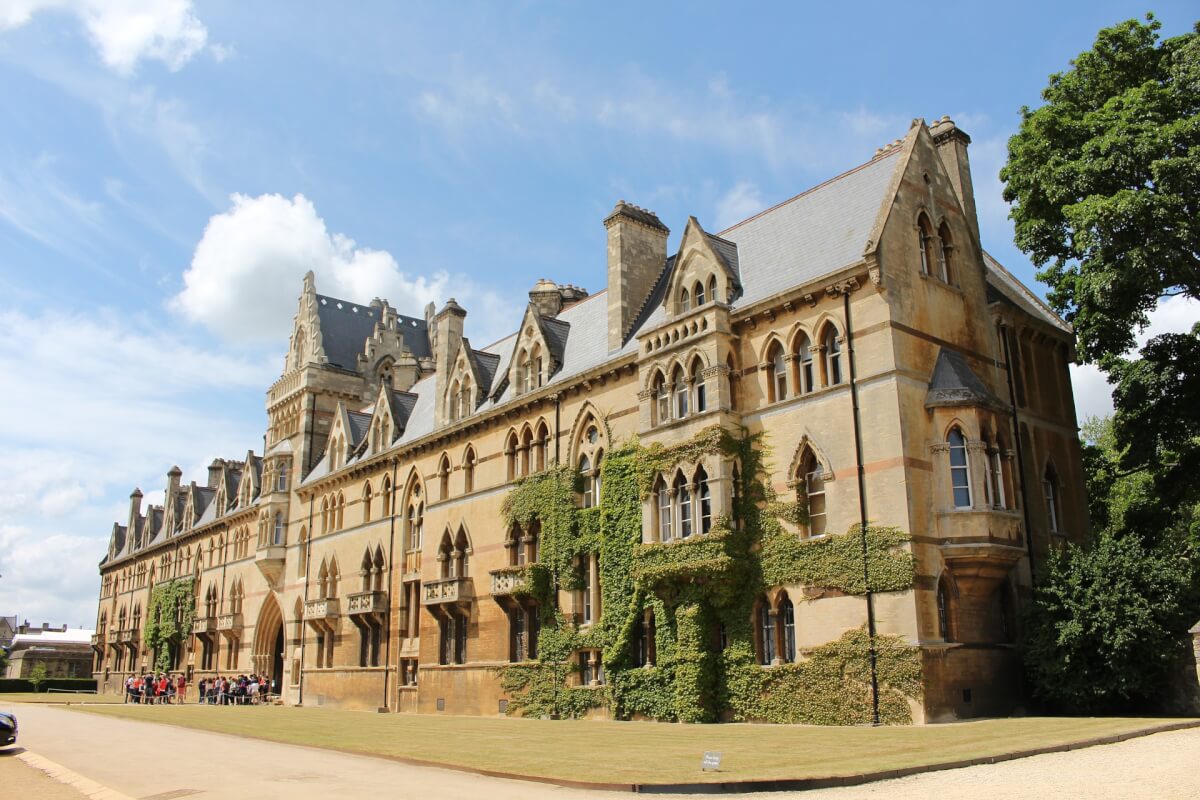 If you want to visit the real Hogwarts, sorry, that’s only in your dreams (sob).

You can, however, visit many of the real-life sets at the Warner Bros. Studio Tour in London, or some of the many filming locations in England and Scotland.

One place that was used for a lot of scenes from the Harry Potter movies is Oxford, a famous university city located about an hour by train from London.

But there are several hotspots around town that were both used for filming and as clear inspiration for many of the sets in the franchise.

Here are some of the best Harry Potter filming locations in Oxford you definitely need to check out!

The Great Hall (sort of) and the Stairs Leading to It

Let’s clarify one thing: while the Great Hall from all the Harry Potter movies is actually a set (you can see it on the Warner Bros Studio Tour), it’s well known that this hall in Oxford heavily inspired the film set design.

“The Hall” (as it’s known at Christ Church College) is basically a spitting image of the Great Hall we’ve seen in all the films, just a little bit smaller and minus the floating candles.

The stairs leading up to the Hall also appear in the first two films, the Philosopher’s Stone and the Chamber of Secrets.

While Christ Church College is a working university, you can still visit for a small fee, and if you’re there outside meal-times you can wander into the dining hall as well.

Duke Humfrey’s Library is the oldest reading room in Oxford and one of the oldest in Europe, making it a fitting choice to stand in for the stunning Hogwart’s Library.

This is where Harry first takes the invisibility cloak for a spin in the Philosopher’s Stone, where we often see Ron, Hermione and Harry studying, and, of course, the epic moment when Hermione hits Harry over the head with a book for being flippant about being ‘The Chosen One’.

You can visit the library on a guided tour, and even combine it with a tour of the Divinity School (see the next section).

We see the characters of Harry Potter in the Hogwarts infirmary a few times, since people seem to get injured quite a lot!

In Chamber of Secrets, Harry spends the night here regrowing arm bones after the inept Gilderoy Lockhart turns them to rubber and if you were surprised to see such a STUNNING school infirmary, we’re right there with you!

This gorgeous Gothic vaulted room is actually the Divinity School at the Bodleian Library.

Hermione is also seen recuperating here after halfway turning into a cat from taking Polyjuice Potion during Chamber of Secrets, and it also made a reappearance as the room in Goblet of Fire where McGonagall is teaching everyone how to dance prior to the Yule Ball.

You can visit the Divinity School for as little as £2, or combine it with a tour of the Bodleian Library, including Duke Humfrey’s Library from the previous section.

Where Malfoy Gets Turned into a Ferret

One of the best moments of the Harry Potter franchise has got to be when Professor Moody turned Draco Malfoy into a ferret and bounced him around the hall.

If you ever wondered where that excellent scene was filmed, it was at the New College in Oxford.

This is where you see Harry walking past the students wearing ‘Potter Stinks badges’ after his name was spat out by the Goblet of Fire and Malfoy taunts him while sitting in that ridiculously giant tree.

You can visit New College for £4-£5 between 10.30am-5pm from Easter to October, and between 2pm-4pm from October to Easter.