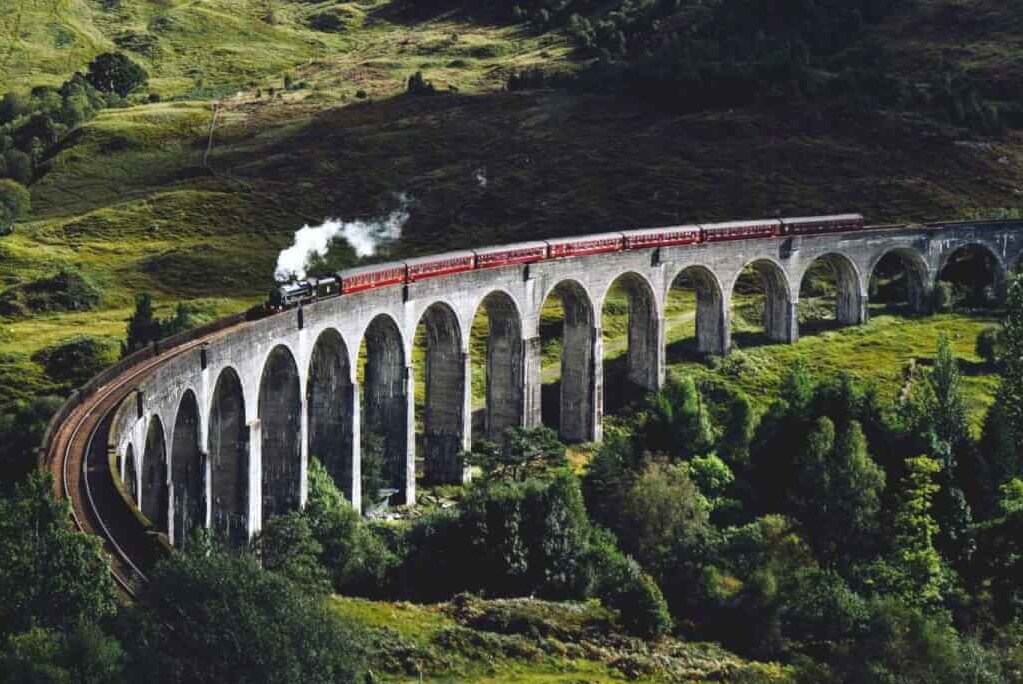 For eager Potterheads who have long waited in vain for their Hogwarts letter to arrive by owl, you’ll be pleased to know that you can visit many of the filming locations from the movies as you continue to wait.

In the books, Hogwarts is actually located in Scotland, so it makes sense that they would film and take much inspiration from the beautiful landscapes of the Highlands and beyond.

If you’re a Potterhead planning a trip to Scotland, you will love being able to visit these iconic places from the films!

Where Death Eaters Board the Hogwarts Express

In Deathly Hallows Part 1, there’s a scene where the Death Eaters stop the Hogwarts Express to climb on board, and where they stop it is on the very picturesque Rannoch Moor.

A lovely backdrop for one of Neville’s sassiest lines, this is also the perfect first spot if you’re planning to visit all locations in this article, as it’s the closest to Edinburgh and Glasgow.

You can explore the interior set of Hagrid’s Hut on the Warner Bros Studio Tour, but the exterior shots were filmed at Clachaig Gully from Prisoner of Azkaban onwards.

According to the official Glencoe website, there were three sets constructed for filming: two near the bottom of Clachaig Gully, and one directly opposite Clachaig Inn. Clachaig Gully and Inn are both parts of Glencoe Valley in the Scottish Highlands, which you can visit by driving or joining a tour.

In the first Triwizard Challenge, Steall Falls was used as a backdrop during the chase scene between the Hungarian Horntail and Harry.

Then they used the 120-foot deep Black Rock Gorge for filming the scene where Harry hides from the dragon.

You can also see Steall Falls in Half-Blood Prince during a Quidditch game while the backdrop of Glen Nevis was often used as the backdrop to the Hogwarts Quidditch stadium.

Steall Falls is actually the second-highest waterfall in Britain and can be reached after a bit of a hike from the Glen Nevis car park.

You’ll also have nice views of the glen and the mountain of Ben Nevis.

Black Rock Gorge is part of a walk you can do from Evanton, a town which is located about a half-hour drive north of Inverness.

The Maze in Triwizard Task 3

The maze from the final Triwizard challenge was also created and then filmed in Glen Nevis, near Fort William in the Scottish Highlands.

Apparently, the entire set was two miles long, half a mile wide and filled the valley.

If you are visiting Glen Nevis and Steall Falls to see where Harry evaded the dragon (from the previous section) then you also might notice that parts of the area feel familiar because you’ve seen it as the backdrop to the maze.

The Viaduct that the Hogwarts Express Goes Over

Remember those scenes of the Hogwarts Express puffing away over an epic bridge, particularly in the Chamber of Secrets when Harry and Ron are flying the Ford Anglia above the train?

If you had ever wished you could ride the Hogwarts Express for yourself then prepare to have all your dreams come true as these scenes were filmed at the Glenfinnan Viaduct which can be seen from a hill behind the Glenfinnan Monument on the banks of Loch Shiel.

You can even ride across the viaduct from onboard the Jacobite steam train that runs between Fort William and Mallaig.

The Great Lake at Hogwarts

Of all the lakes that were used for filming the Great Lake by Hogwarts, Loch Shiel is probably the most well-known.

You see it when Harry and Ron are flying in the Ford Anglia in Chamber of Secrets, as well as in the Chamber of Secrets extended version when you see Harry perched on a viewpoint overlooking the lake with a CGI Hogwarts in the background.

This viewpoint is actually on the hill just behind the Glenfinnan visitor centre and he’s overlooking Loch Shiel!

Loch Shiel also makes appearances in later films when they’re doing landscape shots of the Hogwarts Express, and also in Goblet of Fire, at the very end when you see the groups from Durmstrang and Beuxbatons leaving Hogwarts.

More than one place was used for filming scenes taking place at the Hogwarts Great Lake.

Loch Eilt is where Hagrid can be seen moodily skipping stones in Prisoner of Azkaban after finding out Buckbeak has been sentenced to death and it was often used in scenes involving the Hogwarts Express.

It also makes a brief appearance in Chamber of Secrets when the Ford Anglia flies alongside the Hogwarts Express.

Eilean na Moine is a beautiful little island in Loch Eilt (you can see it in the lake in that shot above of Harry looking out from the viewpoint) that was used in filming as the location of Dumbledore’s final resting place on the Hogwarts grounds.

This is also where Voldemort goes to take the Elder Wand from his corpse at the end of Deathly Hallows Part 1, before calling down lightning to perfectly illuminate the island.

Where the Gringott’s Dragon Lands

In Deathly Hallows Part 2, after Harry, Ron, and Hermione have their epic escape from  Gringotts on board a white dragon, this is the lake they jump into and where Harry has his vision of Voldemort knowing they’re hunting Horcruxes.

Loch Arkaig is located north of Fort William and is a very pretty spot.