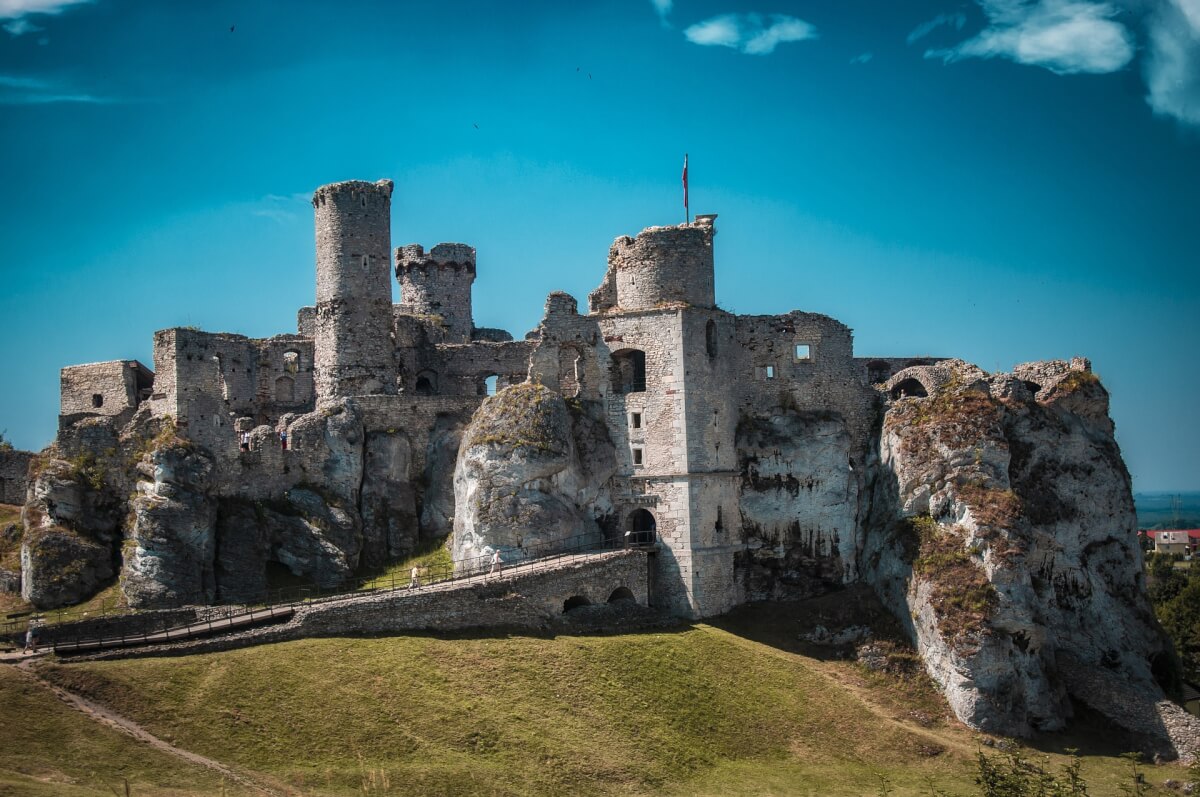 If you’re a fan of the Netlix series The Witcher, then you’ve probably wondered at one point, where was The Witcher filmed?!

The hit series, based on the books by Polish author Andrzej Sapkowski, features lots of magical, and sometimes creepy, places where the action takes place. The crew really did a great job of scouting locations to bring the series to life, with all of the filming taking place in Europe.

We’ve done the research for you though, so if you want to know where all The Witcher filming locations are (from season one at least), then just read on. Many of these gorgeous spots are places you can visit yourself, perfect if you want to go on a Witcher destination trip!

It probably goes without saying, but there are spoilers ahead if you haven’t watched season one yet. We’ll also be updating this post as soon as we’ve watched season two, which is being released on December 17th, 2021.

Two main film studios in Budapest were used for a lot of The Witcher, including the entirety of the events in Blaviken.

All the buildings and the market were built on set at the Mafilm Studios to represent Blaviken, where Geralt receives his infamous title of the Butcher of Blaviken… for saving the townsfolk from bandits.

Mafilm is the largest and most significant film studio in Hungary, having been established way back in 1948.

The other main film studio in Budapest used while filming The Witcher was Origo Studios, which is where the interior halls of Cintra Castle were brought to life.

All the scenes of the main royal hall at different time points were filmed here on purpose-built sets.

Origo Studios is only ten years old but has already helped bring to life some major productions beside The Witcher, other projects they have been involved with include Inferno (the sequel to The Da Vinci Code), Blade Runner 2049 and Dune.

Fort Monostor (Komárom, Hungary), AKA The Walls of Cintra

Some of the exterior shots of the walls and ramparts of Cintra were, however, filmed on location at Fort Monostor.

This fort is located right on the border of Hungary and Slovakia, and it was an excellent choice for showing Cintra’s defenses as the Nilfgaardians attacked, and how Ciri escaped.

There are lots of interesting displays you can explore, explaining the history of the fort in real life.

While the exterior of Stregobor’s home in Blaviken was built on set, the interior scenes were filmed inside the Jaki Chapel in Budapest.

In real life the inner courtyard of the chapel is filled with plants, just like Stregobor’s illusion. You probably won’t see naked ladies everywhere if you visit for real though…

The Hills of Csákberény (Hungary), AKA The Battle of Marnadal

The Battle of Marnadal (where Cintra goes to meet Nilfgaard, King Eist is killed and Queen Calanthe severely injured) was filmed on the Hills of Csákberény.

Csákberény is a village in Hungary, about an hour west of Budapest, surrounded by sparse hills that are perfect for a big battle scene!

The first scenes of Yennefer at her home village were shot at the Szentendre Skanzen Village Museum, an open-air museum just outside of Budapest.

This museum depicts traditional Hungarian folk culture and architecture, so it was perfect as a stand-in for her rural home with a family of pig-farmers.

The scenes where Ciri is in a village (and steals a horse) in episode seven were also filmed here.

Two of the main interior halls of Aretuza were shot inside the Kiscelli Museum in Budapest.

Both the mage graduation ball scenes and the later conclave of the mages discussing what to do about Nilfgaard were filmed in different parts of this art museum.

While the art has been returned, even if you visit today you will easily recognize the parts used for filming.

Tata Castle (Hungary), AKA The Mayor’s House in Rinde

The scenes in and of the house were filmed at Tata Castle, a castle museum on the banks of Lake Oreg, about an hour out of Budapest. The interior houses exhibitions about the building’s history and medieval life.

Fényes Nature Trail (Hungary), AKA The Swamp Where Geralt Fights A Kikimora in Episode One

In the very first scene of The Witcher we see Geralt battling a kikimora in a swamp at night.

This scene, aside from giving us our first look at Geralt’s skills and powers as a witcher, was shot at the Fényes Nature Trail, which is located not far from Tata Castle.

While it looks far less creepy in daylight, you can definitely see how the paths over the water make this an ideal location to film this scene!

When Geralt and Yennefer finally reach the dragon’s lair in “Rare Species”, these scenes were filmed inside the famous Szelim Cave, a tourist attraction located in Tatabánya, a town in the northwest of Hungary.

It’s very recognizable, with a hole in the roof where Borch Three Jackdaws entered in his dragon form.

The Geological Park of Bauxite Mining (Gánt, Hungary), AKA The Nilfgaardian Archaeological Dig

When Jennefer goes to find Istredd, she meets him at a Nilfgaardian archaeological dig site featuring lots of red dirt.

These scenes were filmed in Gánt, Hungary at the Gánti Bauxit Földtani Park (or Geological Park of Bauxite Mining in English), another open-air museum in what used to be a bauxite mine.

Visiting here in real life does feel a bit like you’re on Mars!

While it seemed to be nearby, the area where the dragon hunters make camp before reaching the lair is actually filmed in the Canary Islands, at the Roque de los Muchachos – the highest point on La Palma Island.

Luckily you can drive all the way to the top, so it’s fairly easy to visit for yourself (if you’re in the Canary Islands, of course)!

Another filming location on La Palma was the location of Aretuza, the magical academy where Yennefer becomes a mage.

The actual fortress exterior was created with CGI, but the rocky outcrop it sits on and the offshore tower were created after filming the real life Roque de Santo Domingo and the mainland observation deck.

When Ciri meets the druids inside Brokilon Forest, these scenes were brought to life by filming in the jungles of La Palma Island, including the Los Tilos Waterfall and the Fern Forest of Cubo de la Galga.

Both these locations are reasonably close to each other, so they make for a beautiful couple of places for hiking and seeing the beauty for yourself.

In episode two Geralt meets Jaskier the bard who follows him on his job looking for a devil.

The amusing scenes where Jaskier is following Geralt and they then find Torque the Sylvan were filmed around the Barranco de Fataga river on Gran Canaria. Of course, the exterior of the gravity-defying buildings where Geralt first meets Jaskier were added in digitally.

In episode four of season one, Yennefer portals to a bunch of different locations while trying to save Queen Kalis and her baby from a mage assassin.

The massive ‘desert’ they land in was actually filmed in the dunes of Maspalomas Beach on Gran Canaria. Covering 1,000 acres, these dunes are a protected nature reserve and one of the most famous sites to see on the island.

When Cirilla has a vision in a desert at night, that scene was also filmed in these dunes.

When Yennefer, the Queen and her baby portal out of the rainy town to a rocky area, this spot was also filmed on Gran Canaria at the Roque Nublo.

Roque Nublo is a volcanic rock located on top of a mountain (hence its name “rock in the clouds”) and a popular place for visitors to Gran Canaria.

There are some other unique rock formations nearby so it makes for a memorable location for the site where Jennefer kills the assassin’s creature, fights the mages and tries to save the baby.

Guayedra Beach (Gran Canaria, Canary Islands), AKA The Black Sand Beach Where Yennefer Ends Up With The Baby

When Yennefer finally escapes with the baby she portals into the water of a black-sand beach before trying to revive the baby and then sitting on the shore to deliver her memorable monologue about how the baby didn’t miss out on much by not having a life.

These shots were filmed on Guayedra Beach in Gran Canaria, on the northwest coast of the island. The beach is quite small and feels very remote, just like it did for Yennefer.

Kreuzenstein Castle (Leobendorf, Austria), AKA the Abandoned Castle of Vizima

For the creepy and abandoned Vizima Castle in Temeria the crew of the Witcher headed to Kreuzenstein Castle in Austria to film the exterior shots.

The interior scenes were filmed on set in Budapest, but Kreuzenstein is still a gorgeous castle to visit for a guided tour of the many different areas. It’s definitely not creepy and abandoned in real life!

The producers of the Witcher series really wanted to be able to film at least something in Poland, since that’s where the author of the original series is from.

For the battle of Sodden Hill, they used the Ogrodzieniec Castle Ruins. While the battle in the books just took place on a literal hill, these castle ruins definitely made sense as a place for a last stand so that the mages weren’t all out in the open when opposing the Nilfgaardian army.

Did we miss any Witcher Filming Locations?

Let us know in the comments so we can update our list!