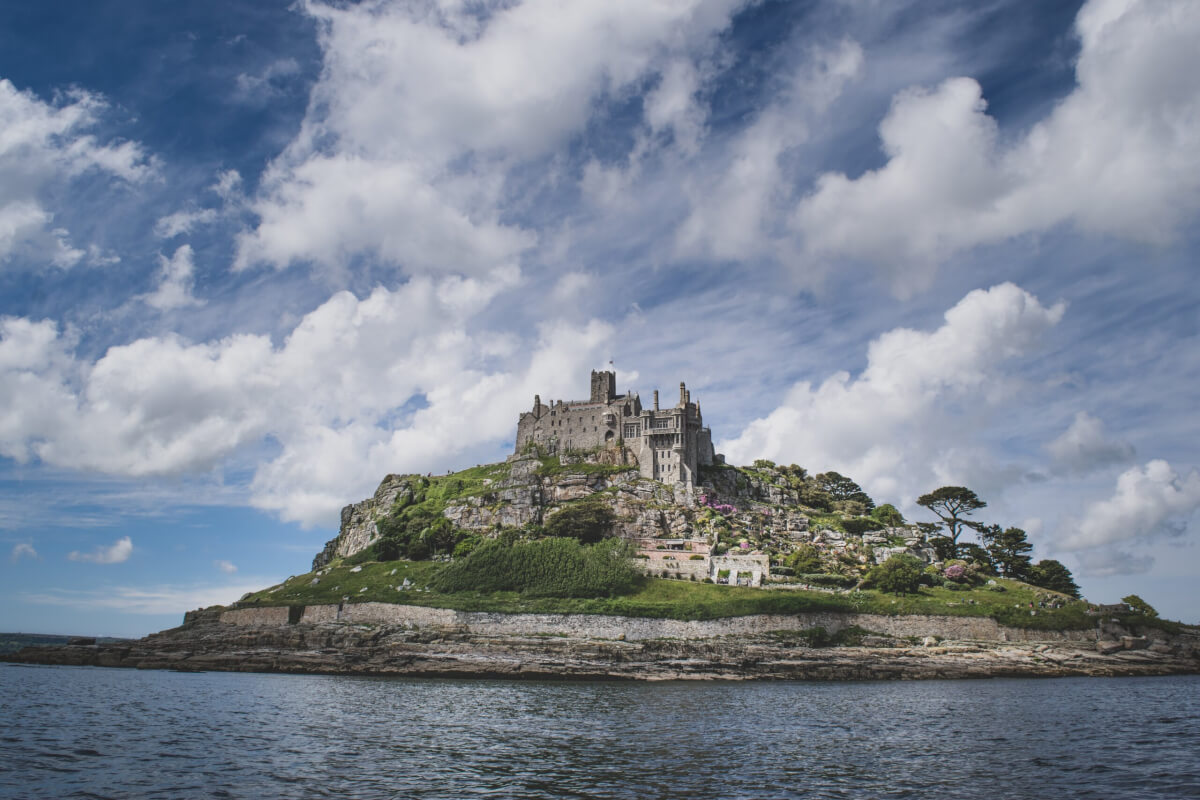 While the original Game of Thrones series was filmed mostly in Belfast, Croatia and Iceland, the new prequel series of House of the Dragon is remaining closer to England – at least so far!

House of the Dragon takes fans of the series back to the world of Westeros, but since it focuses more on one house, that of the Targaryens, the story isn’t as far-reaching geographically as Game of Thrones was.

This probably made life easier for the showrunners, who mostly chose to create the new series on sets or locations in England, Spain and Portugal. If you’ve been watching the new awesome series and wondered where was House of the Dragon filmed, we’ve got you covered!

We’ve rounded up all the known House of the Dragon locations where filming took place in one handy guide, so that you can plan your own trip to real-life locations where the dragons danced, or if you just want to know for curiosity’s sake why that one place looked so familiar.

It goes without saying (but we’ll say it anyway) – if you haven’t seen all the episodes of House of the Dragon yet then there are spoilers ahead!

House of the Dragon Filming Locations in the United Kingdom

Instead of returning to Belfast, most of the House of the Dragon filming was done on sets and locations within England in the United Kingdom. Since much of the action takes place in a relatively small area of Westeros (so far, in season two Winterfell will be brought back to the screen!) it makes sense that a lot of it was filmed not too far from London, where the main sets were located.

There are a lot more dragons in this series than the three from Game of Thrones and, unfortunately, a lot of CGI is required to bring them to life. It’s not surprising that many House of the Dragons scenes were filmed on set at the Warner Brothers Studios in Leavesden, just outside of London.

Most interior scenes took place in sets that were created here, as well as any of the scenes featuring characters on dragonback. Many parts of House of the Dragon were filmed using a new type of CGI technology called virtual production which uses an LED volume stage and thousands of LED screens. These scenes would all have been created on set in the studio.

Driftmark is the seat of House Velaryon and was a prominent location in a couple of House of the Dragon episodes. Since House Velaryon controls the largest fleet in Westeros and is linked to the sea (their house sigil is a seahorse) it makes sense that their ancestral seat is located on a peninsula where the tides often turn it into an island.

St Michael’s Mount in Cornwall is the perfect stand-in for the castle of High Tide on the island of Driftmark. The funeral scenes for Laena were filmed here, with the backdrop of the castle easily seen when the camera pans to the many dragons flying above. When the royal carriages are seen leaving Driftmark the following day, they cross the causeway that leads to St Michael’s Mount, although in the world of the show they were just heading to the harbor.

The vast sandy beach of Holywell Bay Beach in Cornwall was used for a number of scenes, including where Daemon lands his dragon at night in the Stepstones to fight the Triarchy and where Rhaenyra and Lanor come to an agreement about their impending marriage.

This is also where Daemon and Rhaenyra finally consummate their relationship after the funeral of Laena. Yeah, Daemon sleeps with his niece literally at the funeral of his wife, but we’re not here to judge, ok? We’re also willing to bet the scene where Laenor discusses the impending marriage with his lover Joffrey Monmouth was filmed in the Holywell Dunes.

Kynance Cove, Cornwall (AKA The Stepstones)

While Holywell Bay was used for one scene in the Stepstones, most of the filming of this war was done in Kynance Cove on the opposite side of Cornwall. Kynance Cove is known for its rocky coastline, which can be seen in multiple shots of the Velaryon fleet sailing against the forces of the Triarchy.

The scene where Daemon Targaryen says literally not a word but beats the crap out of a messenger was also clearly filmed on the Kynance Cove cliff-top.

In episode one, Rhaenyra commands her dragon to set fire to the pyre where her deceased mother and brother lie. This scene was filmed on the hill of St Catherine’s Tor in Devon, with King’s Landing added in digitally so that it looked like it took place just outside the city. It’s a beautiful area, even without a lovely dragon in real life!

Cave Dale, Derbyshire (AKA The Vale of Arryn)

When Daemon Targaryen (yeah, a lot of the show revolves around him, at least the parts filmed on location!) is banished from court (for like, the third time) he heads back to his wife in the Vale of Arryn. The scene where they talk, she falls from her horse and he, um, kills her, was filmed in Cave Dale. The area seems to be a perfectly lush and green stand-in for the Vale.

Eldon Hill, Derbyshire (AKA The Stepstones and the Exterior of the Dragonpit in King’s Landing)

A couple of events were filmed in the old quarry at Eldon Hill. In the very first episode, viewers see Rhaenyra flying over King’s Landing on her dragon Syrax, before landing in what looks like an area behind the dragonpit. As she talks to Ser Harrold Westerling it’s easy to see the stepped ground behind them where limestone was quarried from this hill.

Later in the season when Daemon pretends to surrender to the Crabfeeder he goes to a beach, but if you look closely you can see the same stepped quarry sides around him, only this time the ground has been covered in sand, dead bodies and the debris of battle.

There aren’t any Google maps photos from within the quarry, but you can see it in the distance from the road here:

A royal hunt takes up most of episode three in season one, where Rhaenyra ends up fleeing the camp with Ser Criston Cole, stabbing a boar and seeing a mythical white stag. The main camp filled with tents was set up in the wide open spaces of Caesar’s Camp, a hill fort which is located in Hampshire.

A quick image search of the area on Google also shows that the scene where Rhaenyra and Criston see the stag was obviously filmed where a seat is located for visitors to enjoy the views in real life.

House of the Dragon Filming Locations in Spain

While the first few seasons of Game of Thrones used Croatia when bringing King’s Landing to life, filming headed to Spain for later seasons. In House of the Dragon, the showrunners also chose to return to the same Spanish locations for a number of scenes where they needed some beautiful medieval architecture.

The towns of Trujillo and Cáceros are right beside each other in the Extremadura region of Spain, and both were used for bringing the streets of King’s Landing to life. The main plaza of Trujillo, in particular, can be seen in episode one as Rhaenyra and Alicent head back into the city in a carriage from the dragonpit.

In the series, a statue of a dragon was added with CGI in the exact location where in real life there’s a statue of a man on a horse.

Other notable King’s Landing scenes were filmed in Cáceros, most notably the Plaza Santa María is where Daemon and the City Watch start chopping off body parts of criminals. When Daemon and Rhaenyra go on a night-time jaunt through Fleabottom, the winding cobbled alleys of Cáceros’ Old Town were also used.

In the second episode, King Viserys takes a walk through the King’s Landing gardens with a very young Laena Velaryon, where they discuss the dragon Vhagar. The beautiful Santa Clotilde Gardens in Girona, Spain were used to film this scene, with real-life views of the Mediterranean Sea behind them. These gorgeous gardens are only about an hour’s drive from Barcelona, so they’re easy to visit if you’re in the area!

Laena Velaryon later ends up marrying and having kids with Daemon, rather than Viserys, and the family spends some time in the city of Pentos. The scenes of them flying their dragons above a castle for the enjoyment of the locals were filmed around the distinctive Calahorra Castle in Granada.

Technically, this location wasn’t actually filmed for House of the Dragon, as apparently the scenes on the Dragonstone entrance bridge were filmed on set using virtual production. The original shots of this dramatic walkway were filmed here for Game of Thrones though, so if you want to feel like you are actually walking up to dragonstone, you will need to head to San Juan de Gaztelugatxe. There’s no dramatic castle on the island for real, but it’s still a stunning location.

House of the Dragon Filming Locations in Portugal

Some scenes in House of the Dragon were also filmed in Portugal, presumably since it’s so nice and close to Spain. However, we’ve only been able to confirm one of the reported filming locations for Portugal, so let us know if you have any more details on the other!

Castle of Monsanto (AKA Dragonstone)

While the bridge at San Juan de Gaztelugatxe stood in for the entrance path to Dragonstone, the Castle of Monsanto in Portugal was used to depict (with the help of CGI) the actual castle of Dragonstone.

If you look on Google maps the exact spot where Rhaenyra’s coronation scene took place is even marked on the map and is very recognizable. The valley of villages below was simply turned into ocean via CGI.

Have Any Tips on House of the Dragon Filming Locations?

Some House of the Dragon filming locations we can’t quite figure out are: