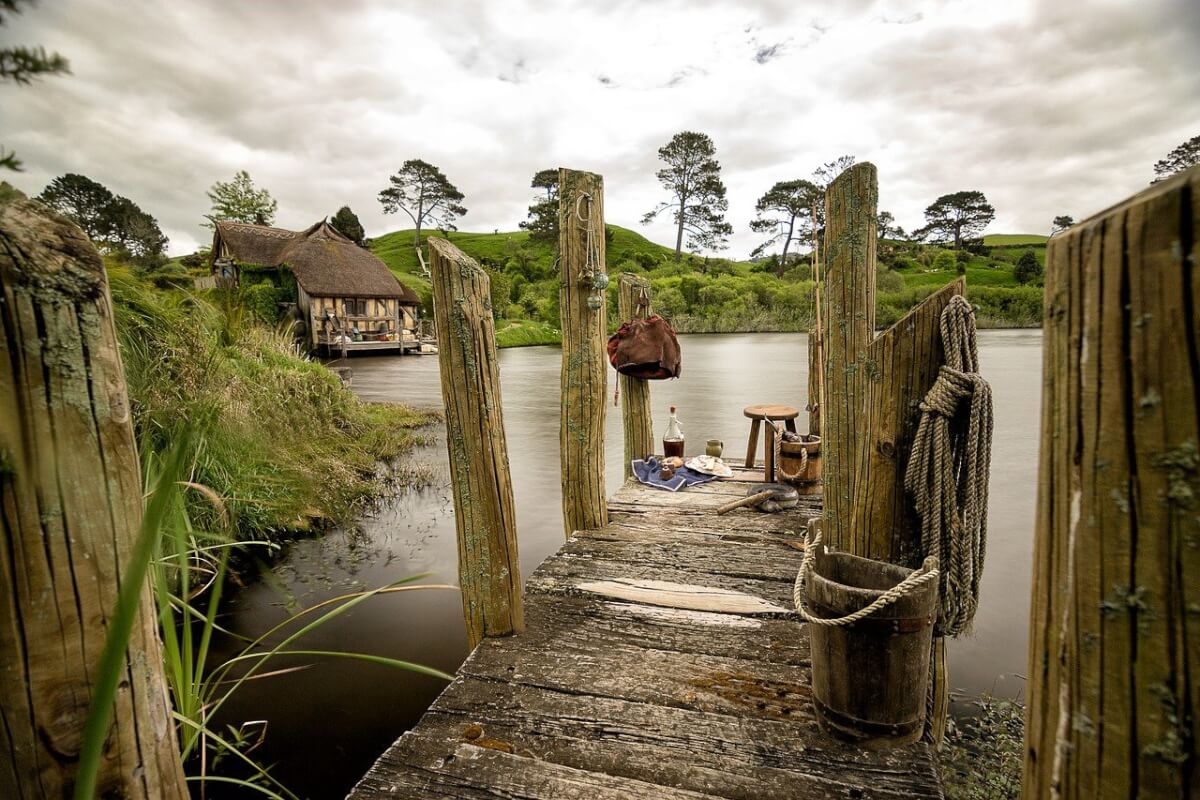 New Zealand famously became known as “the home of Middle Earth” when Peter Jackson chose to film the Lord of the Rings Trilogy there, and he returned ten years later to film The Hobbit movies as well.

Many fans have made the pilgrimage to New Zealand to see the places in real life, but usually the locations used in the LOTR films get all the glory. Well, we’re here to tell you that you need to visit the locations used for The Hobbit films too!

There may not have been as many on-site filming locations for The Hobbit (some scenes were actually filmed on set in England) but that doesn’t mean they’re any less epic.

We’ve rounded up all the best ones here so you can plan your own visit to walk in the footsteps of Thorin, Bilbo, Gandalf and the rest. Some scenes were filmed on private land, so you may not actually be able to visit the spot, but we’ve included ways to visit if you can.

Unlike The Lord of the Rings trilogy, New Zealand’s North Island wasn’t used as much for filming The Hobbit films as the South Island. Of course, some filming was done here, particularly at Hobbiton since it was the filming of The Hobbit movies that led to the set being rebuilt and ultimately becoming a permanent tourist attraction!

All the exterior scenes taking place in Hobbiton were, of course, filmed on the Hobbiton movie set near Matamata.

The set was first constructed here when filming The Lord of the Rings but then left to fall into disrepair.

After the set was reconstructed for The Hobbit films they were left in place and the set became the world-famous attraction we know today.

A few different scenes from The Hobbit: An Unexpected Journey were filmed around the unique rock formations in Piopio.

The Mangaotaki Rocks were the backdrop for the scenes where the company exit from the troll hoard cave, as well as shots of Radagast leading the Gundabad wargs away from the dwarves with his Rhosgobell rabbits!

The greener parts at least, some of this chase was also filmed on the South island – more on that later.

The destroyed farmhouse where they company makes camp (before meeting the trolls), was also filmed in this area, but on private farmland.

The looming cliffs, unusual limestone rock formations and prehistoric forest at Mangaotaki Rocks are well worth exploring in real life – you can even join a Hairy Feet Film Location Tour to see the exact spots with a local guide.

When Bilbo and the Dwarves finally arrive at the Lonely Mountain, they spend some time trying to find the special secret entrance.

These scenes on the mountainside were filmed at the Tūroa ski fields on Mount Ruapehu, during the off-season when it’s not covered in snow.

The crew also made sure to protect the mountain’s native flora and fauna by building scaffolding on the mountain to film from.

They also only spent one day on location here. Wider shots of the Lonely Mountain were also made by filming Mount Ruapehu, which definitely rises up almost alone from the New Zealand landscape.

The woods near Hobbiton where Bilbo first joins the dwarves (and attempts to ride a pony) as well as where Gandalf and he part ways at the end of The Battle of the Five Armies were both filmed on the grounds of Ohotu Station.

This is another private property location, so you can’t really visit the specific spots that are somewhere within this 3,615 acre sheep station.

Many scenes from The Hobbit films were brought to life in New Zealand’s South Island, probably because it features so many fantastical wild landscapes. The Southern Alps are located here, so it makes sense that many mountainous scenes were filmed in the area, but other locations were used as well.

Earnslaw Burn is a glacier near Queenstown that features lots of beautiful cascading waterfalls.

The scenes where the dwarves sneak out of Rivendell and walk amid waterfalls were filmed here. To really experience the magic you can do the four-hour Earnslaw Burn Track from Glenorchy. Just keep an eye out for stone giants!

One of the best scenes in The Desolation of Smaug, apparently for the actors while filming it as well, was when the dwarves escape from Thandruil by floating in barrels down the river.

These scenes were mainly filmed on the Pelorus River, particularly the part when the dwarves exit the barrels and meet Bard, which was filmed in the rocky area at the Pelorus Bridge Scenic Reserve.

Additional shots where the dwarves were in the barrels in some rougher waters were filmed back on the North Island at the Aratiatia Rapids.

The location where the river flows into the Long Lake where Tauriel stands after tracking the orcs was filmed at the section of the Aorere River where the Salisbury Falls are located.

The falls themselves can be seen behind Legolas when he appears after following Tauriel.

When Gandalf, Bilbo and the dwarves are rescued by the eagles, the beautifully scenic area they fly over was filmed using aerial shots of the Fiordland National Park.

Some of the specific areas include David’s Knoll as the outcrop where the eagles drop off the company (and Thorin finally accepts Bilbo) as well as Sutherland Falls as the waterfall the eagles dive down over.

If you want to see the falls up close you can do so by hiking the Milford Track, arguably the most famous walk in New Zealand!

For bringing to life the iconic Lake Town the filmmakers headed to Lake Pukaki and it’s bright blue waters.

The shores of the lake were also used to construct the refugee camp for the people of Lake Town after Smaug destroys the town. If you want to see it for yourself just look for the “Hobbit Film Laketown location” on Google maps.

In the flashback scenes where Thorin leads the refugee dwarves away from Erebor, parts were filmed in the Nokomai Bog (which is difficult to get to) and also at the Mararoa Saddle.

The scene were Thorin majestically poses on an outcrop as the other dwarves straggle behind him (is anything Thorin does not majestic?), in particular, was filmed here. The Mararoa Saddle is also very close to some of the filming locations from The Lord of the Rings as well.

Quite a few scenes were filmed at the Te Anau Downs Station, an 8,800-hectare sheep and beef farming station near the Fiordland National Park. Scenes brought to life on the property include the pretty flower fields that the company walk through on the way to Erebor and scenes of Bilbo returning to Hobbiton with Gandalf. The scene that takes place at the edge of Mirkwood (when Gandalf leaves the party) was also filmed on this private property.

Canaan Downs is a nature reserve near Takaka Hill that was also used when filming a few different scenes.

This is where the company ran away from the huge bear in the woods near Beorn’s house, and the area was used for shots of the company riding out of the Shire area as well.

In the second Hobbit film, the company finally reaches the Lonely Mountain and cross over the desolation of Smaug area – a very dry and rocky landscape which includes the ruins of Dale.

These scenes were brought to life at the Rock and Pillar Range, a series of hills in the Maniototo, an area of inland Otago. The rocky landscape here is very distinctive, with schist tors (or rocky pillars) at the summit.

Did We Miss Any of Your Favorite Hobbit Trilogy Filming Locations?

Let us know in the comments so we can update this list!