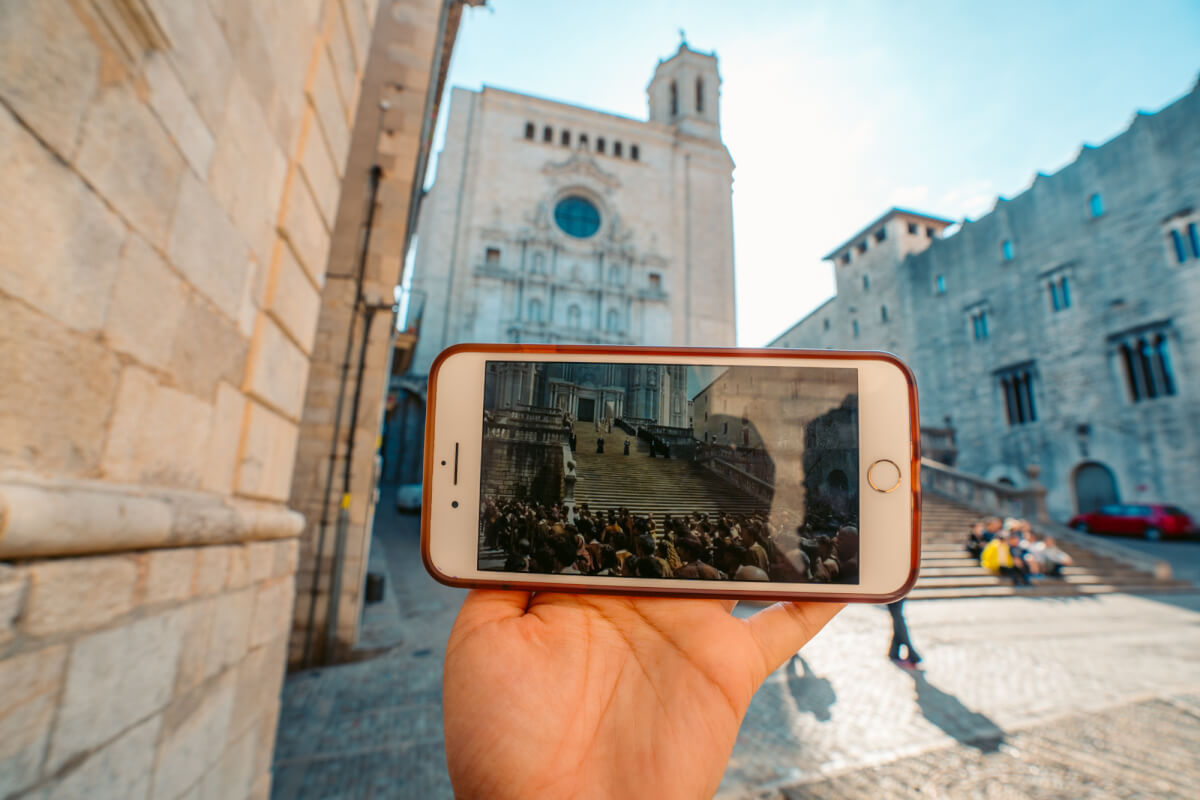 It’s very easy to spot the streets of Girona in Game of Thrones.

After all, with the exception of a few scenes, this Spanish city (about an hour from Barcelona by train) is where they shot all the most epic moments from Arya’s House of Black and White storyline in Season 6, along with some other iconic GoT moments.

So, if you’re keen to step into Braavos, King’s Landing and more for yourself, here is an easy guide to all the Girona Game of Thrones locations, and how to find explore them yourself in a day!

We did this trip on a gorgeous Spring day and had SO much fun. We hope you enjoy geektripping your way through Girona too!

So what’s the big connection between Girona and Game of Thrones anyway? Why is Girona a must-visit for GoT fans?

Well, that’s easy – Girona is Braavos! And a bit of King’s Landing! And Oldtown!

According to this behind the scenes video from the official Game of Thrones YouTube channel, filming took place in Girona for two weeks.

This was the most extensive of all the Spain sets used that season, and involved multiple road closures throughout August and September 2015 (you can see a full list from the city’s official website here).

And while according to this article, HBO and Girona were in negotiations to return for Season 7, no such deal ever materialized, and the relationship between Girona and Game of Thrones remained within Season 6 only.

We’ve created a free DIY Girona Game of Thrones walking tour that you can access below, but if you’d prefer to walk around Girona with an expert guide, the city actually has some companies that offer affordable walking tours that take you to all the different locations.

This one here is very affordable has consistent 5 star reviews.

We really wanted to book it but unfortunately, they didn’t run on Sundays. Click here to check reviews and availability!

Game of Thrones in Girona: A Full List of Filming Locations!

As previously mentioned, Girona was used to film the majority of the Braavos scenes from Arya’s House of Black and White storyline.

Here are some Game of Thrones locations in Girona that you can’t miss, organized in a logical order that you can walk through them as you travel around Girona. You can scroll to the bottom of this post for a walking map.

Again, for those who are especially keen to geek out, you can actually book a full ‘Game of Thrones in Girona’ tour right here.

This is a great Game of Thrones Girona location to start with, because the stunning Girona Cathedral acts as the real life location of the stairs to the Great Sept.

We see it clearly in Season 6, Episode 6 “Blood of my Blood” when the Tyrell army (along with Jamie and Olenna) come up to stop Margery from doing her walk of atonement (much to the dismay of many people, we’re sure).

This is where the High Sparrow announces the new alliance between the Crown and the Faith, that Tommen was no doubt whipped into.

This is also where Lancel spots/follows that boy in Episode 10 of Season 6.

From the Cathedral, we’re very close to another recognizable GoT location in Girona.

The intersection of Carrer de Ferran el Catòlic & Pujada del Rei Marti is the street near the Great Sept where see Jamie and the Tyrell army assemble just before Margery is set to do her walk of Atonement in Season 6, Episode 6, “Blood of my Blood”.

As you proceed down Carrer de Ferran el Catòlic, it might look familiar…

Well, that’s because this is the street where they filmed the Braavos scenes in Season 6 Episode 7 with Arya booking her trip back home to Westeros, you know with her heavy bags of coins, and again we see this in the scene after… um…. you know, her “encounter” with the Waif.

It also appears briefly during the Waif/Arya chase scene in Season 6, Episode 8.

As you continue down this street, you’ll soon pass one of the most famous attractions in Girona – the Arab Baths!

These beautifully preserved public baths are well worth the entry fee, especially if you’re a Game of Thrones fan frolicking through Girona.

Why? This is the exact bath house that Arya runs through as she is trying to run away from the Waig in the Season 6 Episode 8 chase scene. You’ll recognize it immediately!

Further along, you’ll reach the Plaça dels Jurats, a must-see Game of Thrones location in Girona.

This is where that fun rhyming play in Braavos takes place, when Arya is watching because she needs to kill Lady Crane in Season 6 Episode 5 “The Door”, and she’s super upset because her dad is portrayed like a fool, and they do a dramatic recreation of his beheading.

All pretty traumatizing stuff, to be fair.

Arya comes here to watch the play again in Season 6, Episode 6 – remember she’s happily laughing as Joffrey dies, as we all did.

And we see the stage again in Season 6, Episode 8, when Lady Crane says her newly written lines (at Arya’s suggestion) and just before she heads backstage and finds Arya bleeding to death.

Not far from the play setting is another very very memorable Game of Thrones filming location in Girona.

Steps away from the Monestir de Sant Pere de Galligants (more on this GoT location in a bit), you can find the bridge that Arya is standing on, looking wistfully out to the view after she has just booked a trip back to Westeros…

Which is all fine and dandy until the Waif comes disguised as a nun and STABS HER A BUNCH OF TIMES IN THE GUT and throws her in the river.

Oooof. It gets us every time.

Ah, as for the former monastery itself (today home to the Archaeology Museum of Catalonia), make sure to take a look inside because while not a Braavos filming location, it’s still a Girona Game of Thrones location to make note of!

That’s because the gorgeous Monestir de Sant Pere de Galligants in Girona was used to portray the Citadel, AKA Maester HQ.

Close by at the bottom of the steps at Carrer del Bisbe Josep Cartañà is another important GoT filming location in Girona.

This is where we see newly blind Arya in Season 6 Episode 1 “The Red Woman” begging for money before she is attacked by the Waif and they fight…. only to find out she’ll be back to do it again tomorrow, which she does in Season 6 Episode 2 “Home”, when she is fighting the Waig again but this time Jaqen H’Ghar comes and saves her from her beggar lifestyle.

Onwards to Carrer de la Claveria, a great street to escape via window!

This is the street just outside of Lady Crane’s home, as seen in Season 6 Episode 8 when Arya jumps out the window to escape from the Waig after discovering Lady Crane has just been killed.

Arya runs down this narrow alley during that terrifying chase scene with the Waig in Season 6 Episode 8.

The Steps of Sant Martí

Continue onwards in the direction of the beautiful catholic church of Sant Martí Sacosta and you’ll uncover yet another instantly recognizable Game of Thrones location in Girona.

The stairs you see in front of the church are the stairs that Arya falls down when running from the Waig in Season 6 Episode 8, leaving a trail of bloody handprints.

Lastly, this is the (actually really beautiful) little alleyway with stairs that we see Arya walking down during the chase, after she’s been badly hurt by the fall in the stairs, leaving a trail of bloody handprints for the Waig.

This is the scene we see just before she lures the Waig into that dark room and blows out the candles.

BONUS: Where to Find Game of Thrones Ice Cream in Girona

Rocambolesc Gelateria is one of the best ice cream spots in Girona, and is a must-visit for any Game of Thrones fan for one simple reason: they have a Jamie Lannister inspired ice cream!

Yup – it’s blood orange and mango ice cream shaped just like Jamie’s golden hand (or “mano dorada” as they call it at the shop).

So, make sure to visit this shop after you complete your own Girona Game of Thrones walking tour. You’ll have earned your treat.

They even have some Lannister swag on display that they were gifted by the Game of Thrones crew:

NOTE: Google Maps was limited in terms of the streets we could choose, so definitely take shortcuts between Point D and E, as well as Point E to F. There are definitely gardens and nice places to cut through here.

Also, do not take the location pins as the exact points of each location! These pins are simply anchored to the street names, but if you follow the walking route, you should see all the Girona Game of Thrones locations we discussed above. Do note that some locations aren’t marked as “stops” on the walking route even though we pass them – that’s just because Google Maps limits the number of stops you can make.